Having a storm proof roof and external façade is a necessity in Ireland but my wife Karen and I, like most people I think, were more focused on the aesthetics and ensuring that our house blended in to its surroundings, writes self-builder Brian Corry who is on a mission to build himself an eco house.

The West Coast of Scotland is a beautiful place to sail, and in August 2019 I was with some friends on their boat when the forecast of an impending storm came in. We very quickly decided that lying at anchor or sailing through it would not be wise so we made our way to Croabh Haven marina on the Mull of Kintyre to see Storm Ellen out.
Now there isn’t a lot to do on a boat in a marina in the middle of a storm so I decided to go for a run, over the hills to the bay on the other side of us where there was another marina. The weather was horrendous with torrential rain but as I descended into Ardfern, a recently built home with timber cladding caught my eye.

Karen and I had been scouring the web looking at different façades – we had ordered all sorts of samples but we couldn’t find one we liked. We liked the look of cedar cladding but were concerned about how it would weather and while there were some fine composite timber effect boards, we just didn’t feel that the colour was natural enough.

Similarly there were some plastic wood effect boards which in small areas looked fine but we didn’t think it would be successful over a larger area.

It was here, in the midst of a storm, that I found something that could work on our house. I knocked on the door, dripping in my shorts and running jacket to ask what type of wood they had used and where they had sourced it.

They kindly let me stand just inside the door whilst they wrote down the details of the Siberian Larch for me and I thanked them and left them a large puddle where I had waited.

Karen and looked up the suppliers’ website and found lots of images that really impressed us. What we couldn’t decide upon was how much to use. Karen quite liked the idea of having part of the house rendered and she felt that if the whole house was clad in larch that it might look a bit heavy and dull or too much like a barn.
We consulted our architect and he suggested half and half for the front of the house, full larch cladding on the sides and the back fully rendered. When the computer simulation was created, it seemed a good balance.

This was after we had requested planning permission but we had left the actual material choice vague on the application.

I subsequently made enquiries with the Scottish supplier but soon found that the cost and especially the shipping was quite high – the wood itself was coming in at close to £10K, with the secret fixings at £2.5K and the delivery at £1.5K. At £14K plus VAT it was well over budget.

Shortly after, I happened to pass a stand at Selfbuild Live Belfast and they showed me samples of some very nice Siberian larch. Machined in eastern Europe, it had very few knots and was also significantly more economical as it was sawn in a rhombus shape, which removed the need to overlap the timbers, thereby significantly reducing the quantity required.

The decision for the roof covering was another difficult one. Our roof is a low angle curve making it unsuitable for traditional slates or tiles. We loved the look of zinc standing seam having seen countless of examples in magazines and whilst out driving. We also felt it would work really well in our rural location, however cost was a major issue given how large our curved roof was with all the overhangs.

At the beginning I had asked for a price per square meter from a local supplier and used this as a basis for my budget which came out at approximately £100 per square metre. Naively, when setting the budget, I hadn’t factored in the build-up materials required underneath the zinc nor all the trimmings and guttering which proved to be a significant extra cost.

The end result was that when I priced the roof properly it came back 50 per cent more than I had allowed for.

We began to look at alternatives and came across an PVC product at SelfBuild Live Belfast that provided a very similar look but was much more economical.

We looked carefully at the guarantees and warranties and were happy that the product would not fade and would last as long as we needed it to. Compared to zinc, it came in about half price. This however isn’t the final word on the issue as we are also currently looking at a corrugated fibre cement profiled roofing sheet as an alternative. Decisions, decisions…

When is the best time to plant a tree? The answer is 20 years ago, but the next best time is today! Planting a lot of trees was high up on the priority list, for both privacy and the desire to create a woodland within our eight acre field.

We planted whips in areas away from the site before starting any other work so that they would have the chance to grow as the project proceeded. This was accomplished with the help of a landscape architect who drew up a planting schedule according to our wishes and helped us specify the right types of tree species.

The hard landscaping planned for around the house was fairly straightforward as we wanted a patio at the rear and a reasonably sized garden.

There was a lively debate between Karen and I over how big the garden should be. I wanted to keep it relatively compact but Karen had visions of a large, well trimmed lawn. Because Karen gets hay fever from cut grass it would be up to me to do the cutting.

In my teenage years I spent countless hours cutting the grass of my parents’ large garden and I had no desire to repeat this. We did of course come to an amicable compromise!

For the driveway and parking area at the front of the house we decided on a mixture of tarmac drive and then a gravel area held together in a plastic grid system, allowing for the water the drain while keeping the gravel in place. 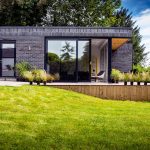 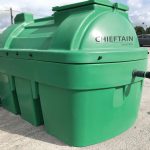