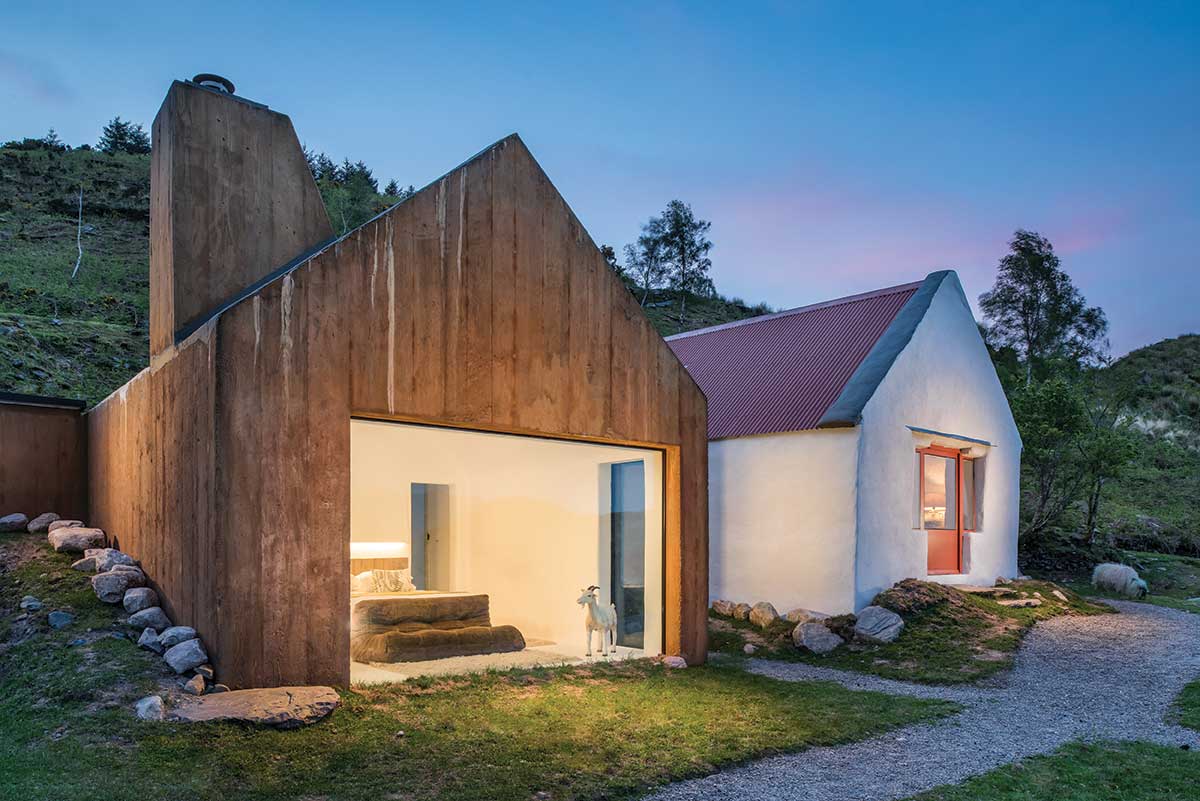 Smell the landscape and keep the company of goats.

Adding a contemporary extension to a vernacular dwelling requires a deft hand to avoid spoiling the views. In this case it’s not just the cottage nestled within that enhances the landscape but also the contemporary addition which manages to further ground the building.

The brainchild of a hands-on self-builder, with some inspiration from people like John Pawson whose architectural work is rooted in texture and environment (see book review p87), the project started as the straightforward renovation of an old house with two windows either side of the door and central fireplace.

This cottage and many similar ones aren’t recorded in the County Development Plan as protected structures and therefore are not always sympathetically restored, some of them even knocked down. The Co Kerry planners were therefore glad to hear of this renovation, but planning permission wasn’t required.

Derelict since the 1960s and occupied by goats, the cottage was sympathetically restored on a budget. Armed with a ladder, a hammer and a chisel the early days were full of energy, spirit and aspirations. Advice came from craftsmen specialised in working with lime, a local carpenter and joiner. The process took nine months and was tackled on a day by day basis.

First came the roof which was stripped of its insulative layers of turf, moss, hay and rusted-through corrugated metal. The walls were in poor condition and brought down to a level where they were flat and sound, rebuilt with stone and lime mortar. The new roof structure was sourced locally from larch trees whose bark was stripped; they were cut in winter and let dry for a month in the round (150mm diameter).

The roof trusses’ carpentry work was done with a chainsaw. To allow evening light to enter, the new roof has three rectangular rooflights and is made of corrugated Perspex on the exterior and frosted panes on the inside. To deaden the drum effect of rain, the insulation build up includes 150mm stone wool which has better acoustic properties than standard mineral wool. For added thermal insulation they added PIR boards.

Lime was used as a plaster finish both inside and out, a visually ‘warm’ material and one that doesn’t do hard edges. External plastering work is best done above 10 degC unless there’s some form of heat source, in hot weather it can dry out too quickly if left unprotected. The new plumbing and electrics are hidden in the wall, chased prior to plastering. 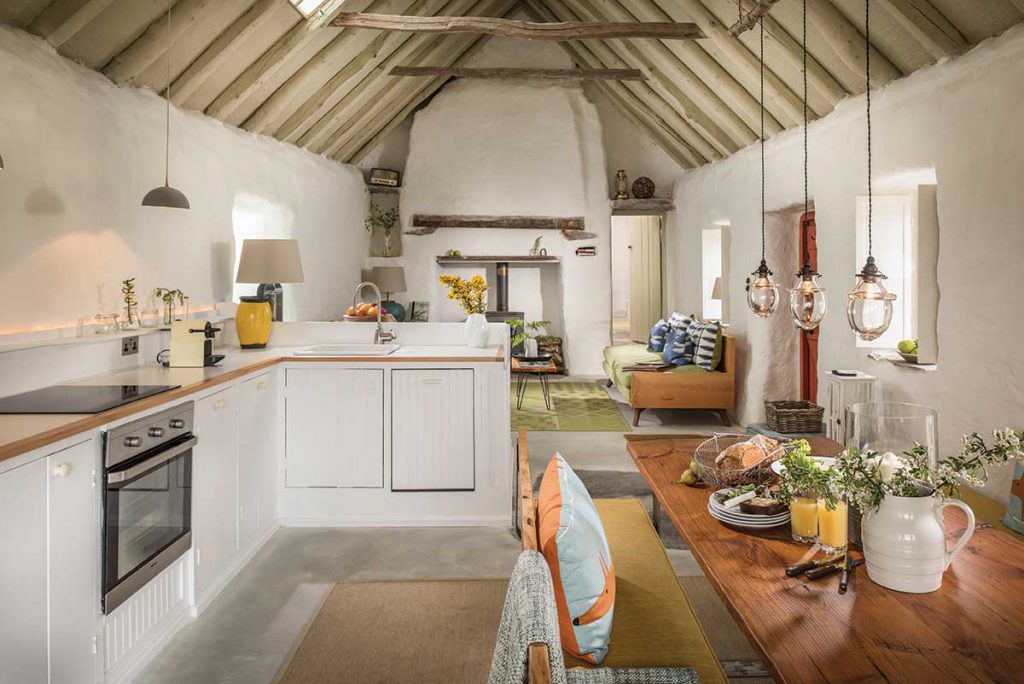 The floor was originally cast in lime but it suffered from wear and tear so when the extension was built and underfloor heating installed throughout, they took the opportunity to replace them all with a white concrete floor above PIR insulation boards. Inexperience had another downside. Even though the original intent was to keep the fireplace, for the aesthetics, they realised too late they’d put in the wrong sized flue in the chimney – you need a minimum of 250mm for an open fire and they had 175mm. So a stove was put in its place.

A major challenge during this initial phase was knocking through the gable end of the cottage that was facing the lake, this required four reinforced concrete sill beams. As for the glazing a local joiner took the existing sash windows and replicated them individually with hardwood; hand rolled glass provides a traditional distorted effect. Secondary glazing keeps the cold out yet isn’t noticeable.

The details were all important at every point, from the Bakelite switches sourced from architectural salvage to two pin ceramic plugs for European travellers.

Then, a meeting of minds with architect Maxime Laroussi of Urban Agency who used the gently sloping site as an ideal backdrop for a shed-like extension. He designed the south-facing bedroom block so that from the vantage point of the bed, built up from the floor with simple formwork, you get panoramic views that stretch 100 square miles.

As the project had to be contained within the 40sqm planning exemption guidelines, the new part could only be modest in size, broken down into two small hut-like structures as a reference to traditional Irish cottages and barns. In total the house is now 90sqm.

Builders undertook this part of the project in part due to the homeowner’s work commitments but also because the addition is entirely made, walls and roof, of in situ (poured on site) concrete. The formwork for the concrete to be poured into was created using sandblasted Douglas fir on the exterior face giving a very pronounced grain. The concrete protects from driving wind and rain, echoing the style of surrounding barn structures clad in corrugated steel. 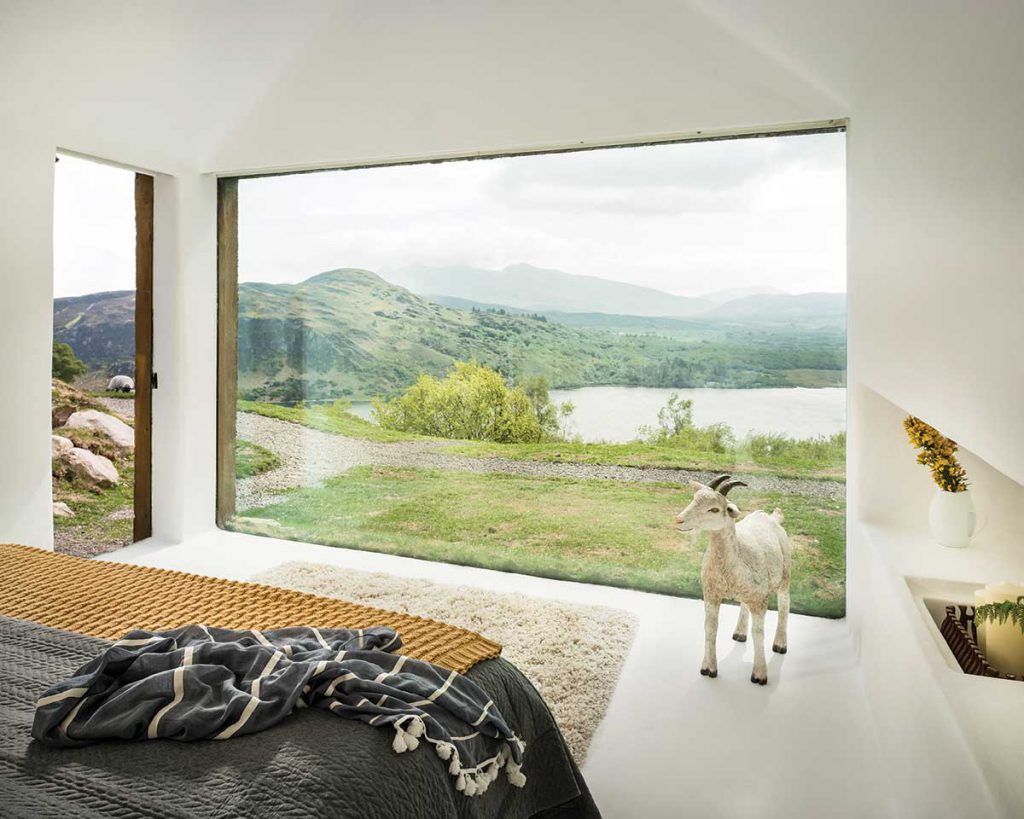 The roof itself had to be cast in a single pour which proved to be the greatest challenge. The first builder left the project at this stage but luckily a local contractor stepped in. The extension is finished on the outside with an iron sulphate mix commonly used in agriculture, a low cost option that was also easy to apply. The resulting oxidation provides a natural rust colour that only needs to be reapplied every 10 years.

A nine inch cavity was added on the inside of the new build and filled with PIR; the roof insulated with closed cell spray foam. The heat and hot water come from an air source heat pump.

The entire interior of the new block is also rendered in lime to match the cottage; the colour finishes are mineral paint which is compatible with lime. The house is so well insulated that with time it became clear there was a need for a mechanised ventilation unit, and a heat recovery ventilation system was installed retroactively.

*For those who would like to experience the house and see the architecture firsthand, Lost Cottage is available to rent for luxury self-catering holidays for up to four people through Unique Home Stays, with a week’s stay from £1,295. uniquehomestays.com 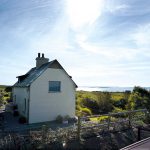 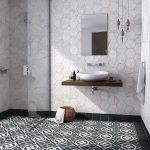