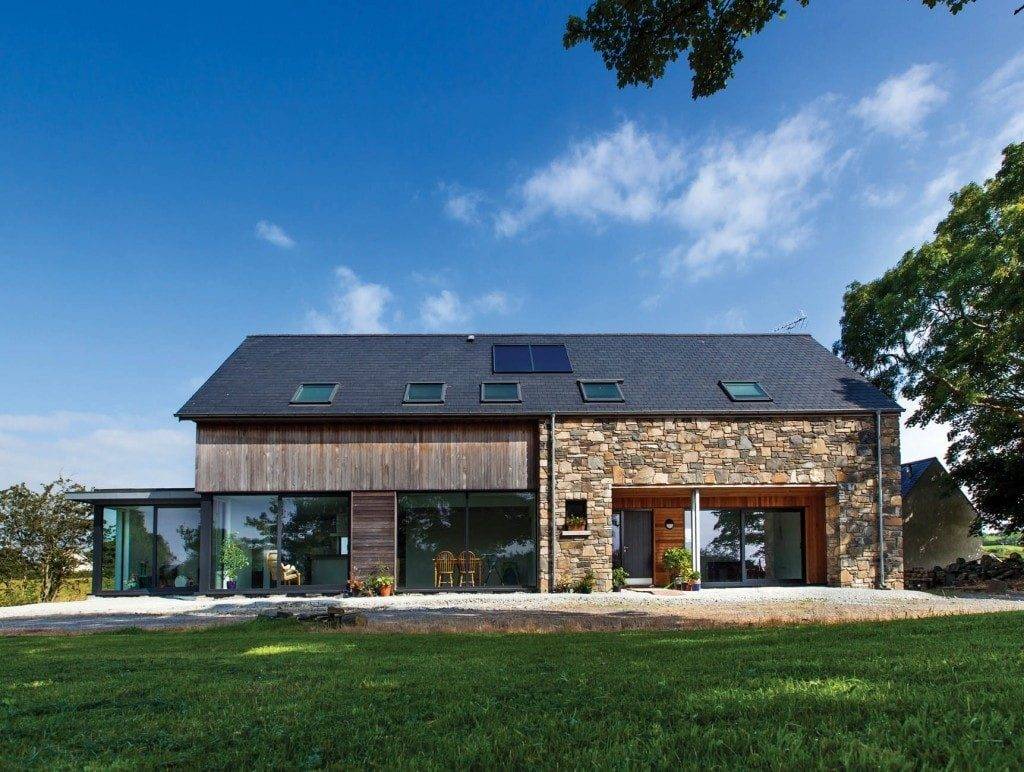 Back in 2004, gaining planning permission to build a new home in a rural setting in NI was quite different to today. Then, the only real chance of success was to find a building that could loosely be described as ‘habitable’ in that it had a serviceable roof.

Site cost: £60,000
Site size: ¾ acre
Project cost including all site works and interiors (to date): £150,000
House size: 2,800sq main house
Current value: Overall, house prices in NI are still falling so this is really impossible to estimate. What I would say is that individual homes like ours have been much less affected by the downturn than other sectors of the market.

Alan Molloy and his partner Sharon Daly didn’t have to look further than the field next to Alan’s family home in Co Down, to the old farm steading Alan had played in as a child and so, naturally, close to his heart.

Following successful negotiations with the farmer to buy the old farmhouse with its outbuildings, Alan duly applied for outline planning permission for a replacement dwelling. It doesn’t take much imagination to know how Alan felt, two weeks after lodging the application, when he came down the lane one morning and found the dust settling on a digger which had just finished demolishing the farmhouse! Enquiries revealed that the farmer had sold the stone in the farmhouse to someone else three years previously. Fortunately the planners were reasonable, Alan and Sharon got their permission to build and there was enough stone left in the outbuildings for what they needed in the new house. 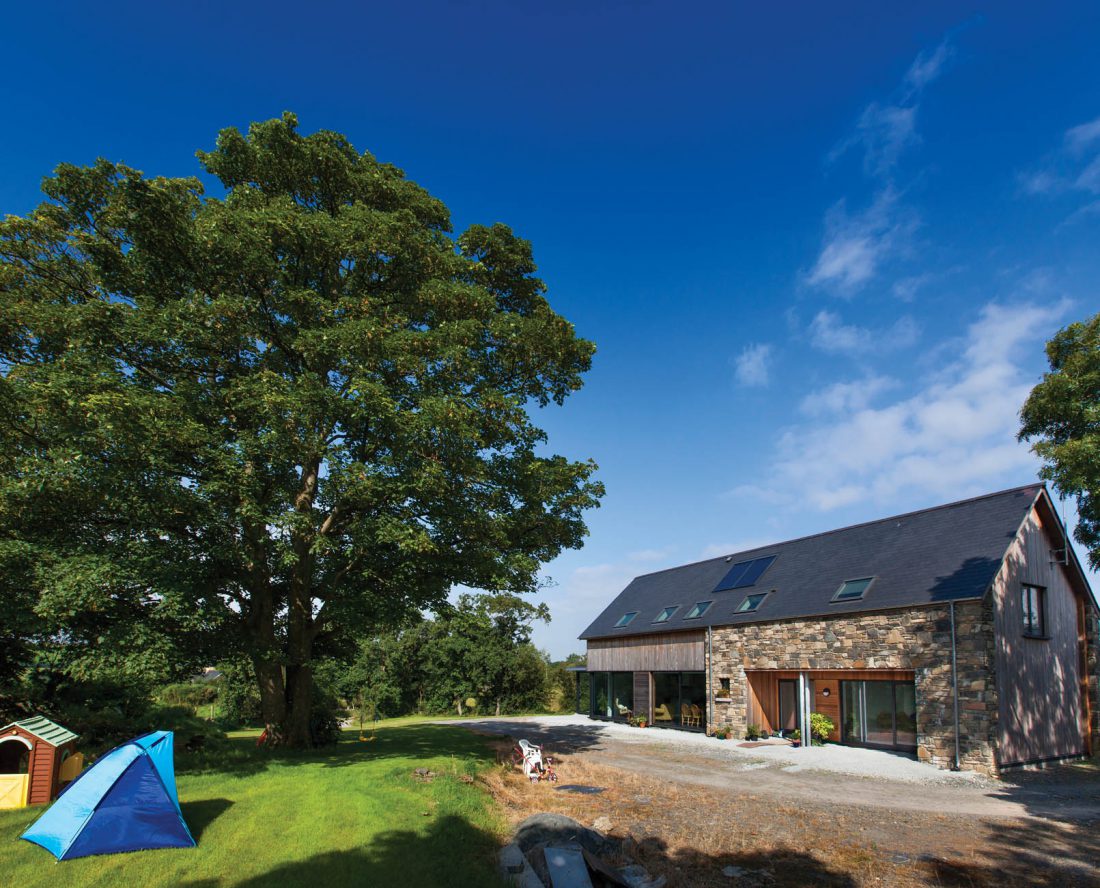 By now the construction industry was entering the boom years and as a joiner and carpenter, Alan was much in demand and there was little time to spend on their own home, which was perhaps, with hindsight, helpful.

“We bought the site when I was in my early 20’s with not much saved so waiting three years before starting to build allowed us to save for the build and use any spare time we had to gather information and ideas. I’m afraid that as soon as we heard of anyone self-building we invited ourselves over for a look around! In fact people were very generous with their time, sharing ideas and answering our questions. Our architect encouraged us to create a book with a montage of all our ideas, with the result that his first design we hardly changed at all and the internal layout only slightly. The cedar cladding was his idea and we’re delighted with it, it’s very striking.”

In 2007 the foundations were poured, the timber frame arrived, was erected – and the construction industry began to go into recession. Making a virtue out of a necessity, Alan took the next six months as a sabbatical, working full time on the house instead. Although they were living in Belfast, over 20 miles/35 kilometres distant from the site, there was always a hot meal and a bed available at his parents’ house up the lane, allowing Alan to be on site at hours of the day he would otherwise have spent sitting in the car, driving to and from, which saved a lot of time and effort, not to mention petrol cost.

About this time, Alan’s father suffered a brief illness from which he has now thankfully fully recovered after a long convalescence. Being from a farming background, he was naturally very active and with a former career as a joiner/foreman, there couldn’t have been a better person to have on site when Alan was absent.

“He really was very, very helpful” said Alan, “apart from just being there to check off deliveries, having his advice, expertise and experience made a big difference to us.

From their many visits to friends houses, Alan and Sharon had decided upon an open plan layout incorporating a kitchen, living and dining room with a sun room off and a separate formal living room on the ground floor, the centre of which is double height above the dining area. The stairs rise out of the entrance hallway and into a study with, to one side the master bedroom with en suite and walk in wardrobe and to the other, a bridge forming the edge of the void below leads you to two double bedrooms and a family bathroom.

There is underfloor heating on the ground floor with radiators on the floor above, fuelled by a log boiler which also provides hot water, in addition to that obtained from the solar panels. The house is zoned upstairs and down with TRVs on the radiators and thermostats linked to the boiler. The upper floor was constructed using I beam joists with an acoustic layer below the plywood covering with a finished wood laminate surface. On the ground floor the covering is of 600 x 600mm Brazilian slate tiles, which resulted in an unexpected two weeks hard labour for Alan and some very good friends, as Alan explained. “The slate had to be finished with a spray on sealant which sounded the easiest thing in the world. The trouble was I put it on too thickly and it dried to a hard grey finish which took three of us two weeks of scrubbing to get back to how it should look. I won’t forget that in a hurry!” 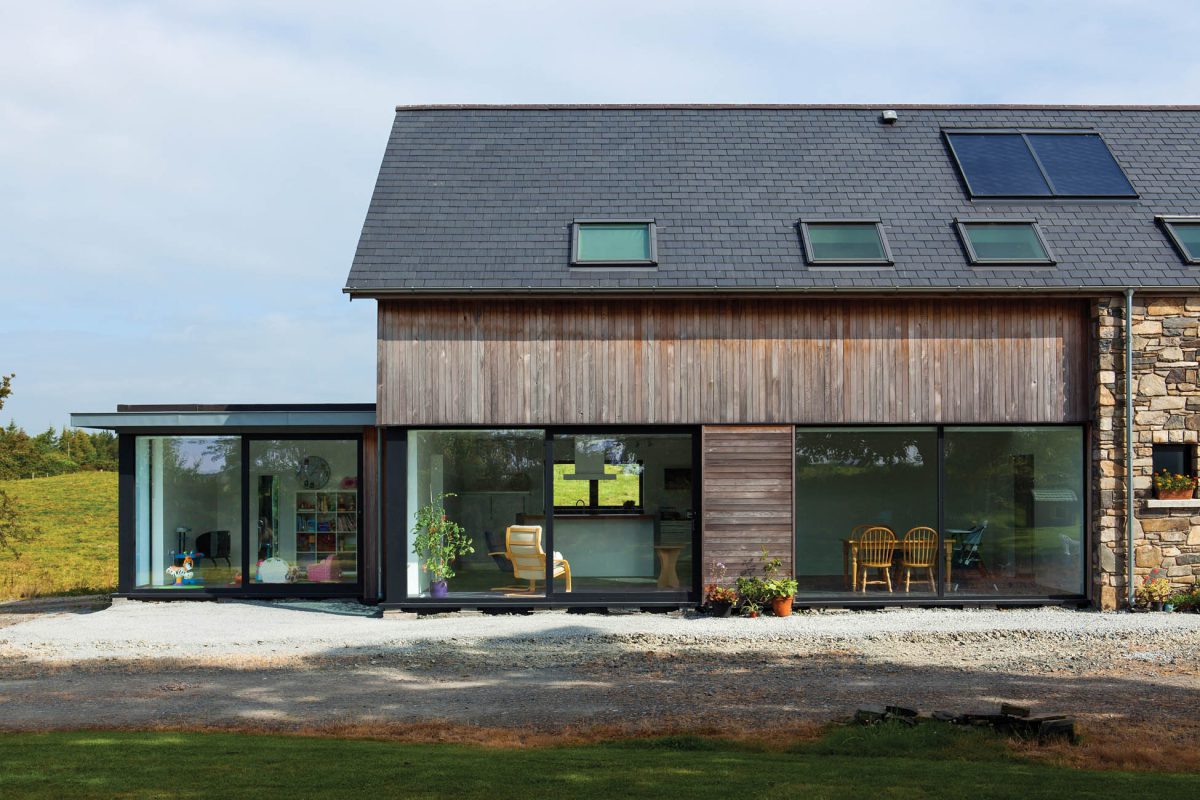 Overall the house is rather bigger than they need at present with two young children, but Alan and Sharon knew that it was better to do that now and work at finishing it over a number of years, than find themselves needing more space as their family grow up. Although it’s only five years since the couple began their build, in 2007/8 the idea of an almost Passiv house with high levels of insulation and making use of solar gain as an integral part of the heating system was very new. The concept of using the fabric in this way, with double or triple glazing – Alan and Sharon have double – and mechanical ventilation with heat recovery (HRV), is now established practice, ‘making the fabric work for you’ as Alan puts it.

“Even choosing timber frame and not ‘traditional’ block had my workmates forecasting flimsy walls, draughts and the house getting cold easily, all of which couldn’t be further from the truth. If anything, I probably spent too much on the heating as we rarely use either the radiators or underfloor; I feed the log boiler with a barrow load of timber and it heats a 1,000 litre buffer tank of hot water with a zero heat loss pipe between the garage and house, which lasts us for three days. If we need any central heating then I light it daily, but the high level of insulation combined with the solar gain mean that doesn’t happen very often. Working as a joiner on sites is very helpful as I’m always collecting scrap wood, I think I’ve got at least three years supply in stock. I have noticed though that with the recession, many more people are using ‘free’ fuel and on a Saturday afternoon you can hear across the County chainsaws cutting logs!”

Although he didn’t claim it to be, Alan and Sharon’s house must be almost carbon neutral as all the water used in the house is harvested from the roof and passed through an ultra violet filter to make it safe. 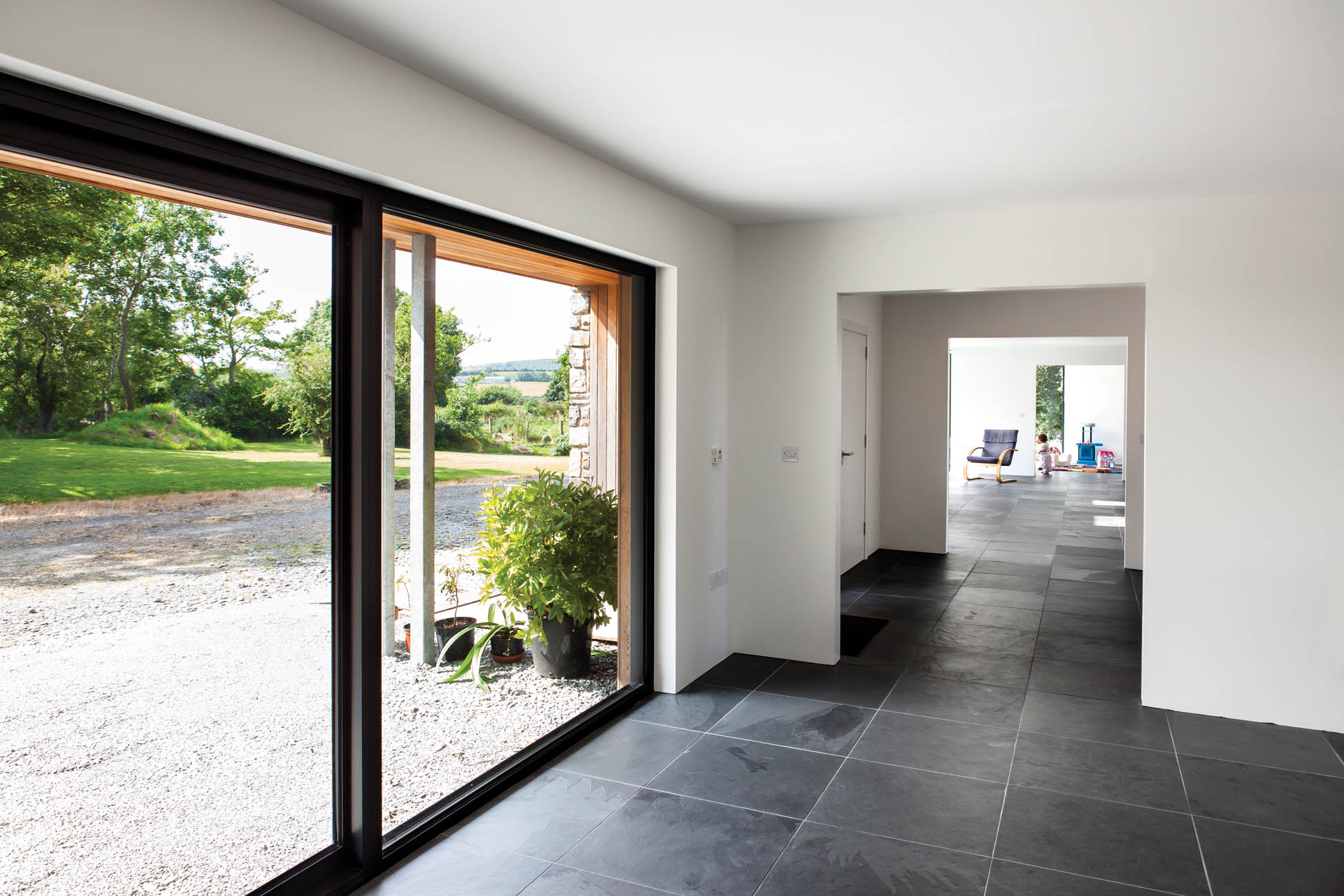 It’s all very different from when the couple first came to live in Co Down. Sharon is slightly asthmatic and as winter 2009 approached she was also pregnant, so the couple decided to move out of their city flat and take up residence on site in the fresher, cleaner country air. Unfortunately they were unable to live in the house as it was still under construction. “One of the larger outbuildings I’d always planned to be a games room so with friends help we found an old kitchen being thrown out as well as flooring and cupboards and fixed it up as a temporary home. We moved in just before Christmas 2009 and I’ll never forget our daughter being born, though not for the usual reasons. Sharon went into labour two weeks later, it was minus 12 degrees and all the pipes froze!”

The house is still work in progress, the couple now have two children and with Alan’s skills as a tradesman much in demand, it’s difficult finding the time to finish it. But they are not in a hurry, as Alan explained.

“We didn’t skimp on the insulation or the expense of an MVHR, (mechanical ventilation with heat recovery), system because these pay you back over time and are very difficult, and expensive, to retrofit. The ventilation system alone was worth it, it’s been a real life changer for Sharon whose quality of life has been transformed. We’ve also found our tastes have changed and evolved over the years we’ve been here – we still watch Grand Designs! I’ve tended to do things for the children like the play area outside and the sun room has become their playroom.

The kitchen is completely finished but we still have to choose furniture for the living and dining area and I’m afraid we’ve still just got a mattress in our bedroom! But we love living here and it’s very satisfying to save up and then do something the way we want to when we are ready to,rather than feel under pressure to have it all finished. Sharon is from a farming background and was very hands on throughout the build whilst her training as an accountant was essential to keeping us to our budget.”

Experienced tradesman though he is, having worked on both residential and big commercial projects for many years, Alan was keen to emphasise the input from their architect.

“I knew John from playing football together and chatted to him about what we wanted to achieve. Employing friends professionally is often a recipe for disaster but in our case it worked the other way. John knew us well and combined this with an aesthetic approach which has resulted in a home we really love.” 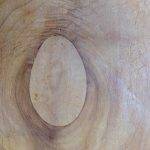 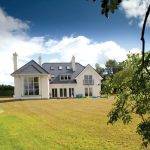