This is the story of a beautiful family house built from concrete in Athlone.

“We were building close to my family home so the key for us was to build once and build forever. A key choice for us was concrete because of the durability and the longevity of the build. We were also building on an exposed site so we wanted to ensure that we had a good, solid structure.”

“We wanted to build a house as energy efficient as we could so we definitely put a lot of research into the fabric of the house to ensure that we chose the correct fabric for the local conditions and for our lifestyle. But pretty quickly it came down that we were going to go with concrete.”

“When Paul and Lindy first approached us to design their home, they had a very open brief but they were quite focussed in their vision of what they were trying to achieve in their design.”

“Something that was robust and they were looking for something that offered them a good degree of soundproofing between bedrooms and living spaces so the obvious choice in this particular instance was to direct them towards concrete built.”

“We felt that the thermal mass properties of a concrete built home would allow for that slow release of energy during the heating period times of the year but would also allow for absorbing excess energy during summer months when cooling might be required. It was key for us when we were building to get an A-rated house.”

“While it’s beneficial to our pocket, it also feels good to be saving energy and saving money and hopefully doing your bit for the environment as well. In the end we decided on the dual leaf so that you have your separation layer and that the insulation is within the walls.”

“The concrete inner leaf is like a storage heater so like anyone who knows a storage heater in an apartment, it takes a good while to heat them up and then a longer time for them to cool down.”

“So we wanted to have a glass balustrade on our stairs and we had designed our gangway upstairs to have that glass balustrade. So the only option really was to go with a concrete built stairs, we wanted that solidity, there was no point building a good, sturdy house and then having some elements that don’t feel as sturdy.”

“We designed that house around the sun coming up in the morning in the east and going down in the west. The solar gain is unbelievable, we love the open plan element of it. We would have been doubtful initially on how can we heat a house this size and keep it comfortable but with the concrete built house, the insulation and the airtightness that hasn’t been an issue whatsoever.” 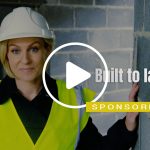 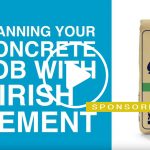