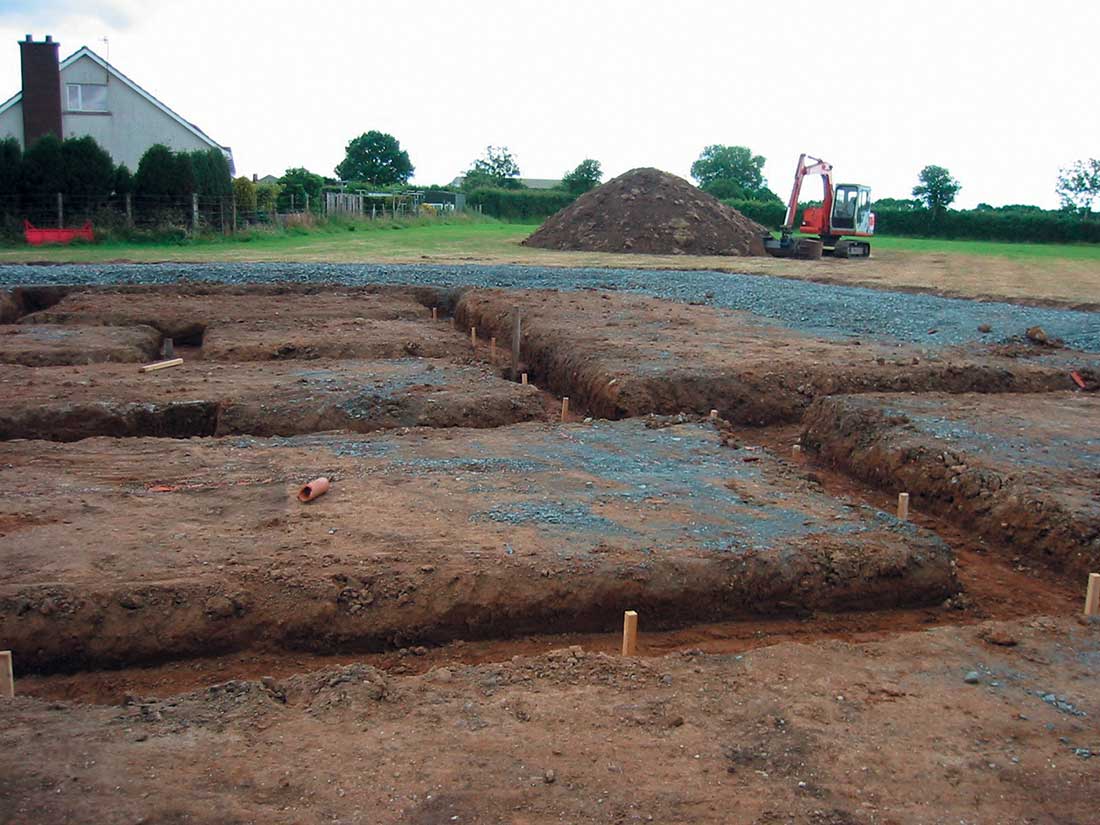 Foundations support the weight of your house, here’s what you need to know about them.

Foundation design and performance depend on two factors, the nature of the ground on which they are placed and the load, which in the case of a house isn’t huge. For self-builds foundation design is therefore mostly about matching house type to ground type, and this is only a job for a structural engineer.

A site visit will come first, e.g. are the neighbouring houses showing cracks or their rooflines sagged – both may be an indication of subsidence caused by ground movement. (Sagging rooflines could also indicate spreading walls or weakened roof timbers.) Trial holes give more detailed information on the site conditions.

Before any excavation, including trial pits, commences, it’s very important that you locate any services running through the site. Your local council may have plans showing their location, as will the telecoms and gas companies. Neighbours may also be able to help. It should never be assumed that the site is free from services.

’Protect open trenches and have the site well signed warning of the dangers, not just the entrance but also around it and on access roads…’

Protect open trenches and have the site well signed warning of the dangers, not just the entrance but also around it and on access roads. All machinery should be properly parked and locked when not in use.

Because package timber frame panels are built off-site there is little room for error when it comes to the foundation fixings, these need to be level to within 20mm and square to within 12mm. Many timber frame companies therefore arrange to put the foundations in themselves.

Oak trees tend to flourish in heavy soils, conifers in peat, willow and alder in wet loam, beech light clay and lime trees in limestone. Nearby trees, groundwater as well as water streams all need to be examined as they could impact on your foundations. 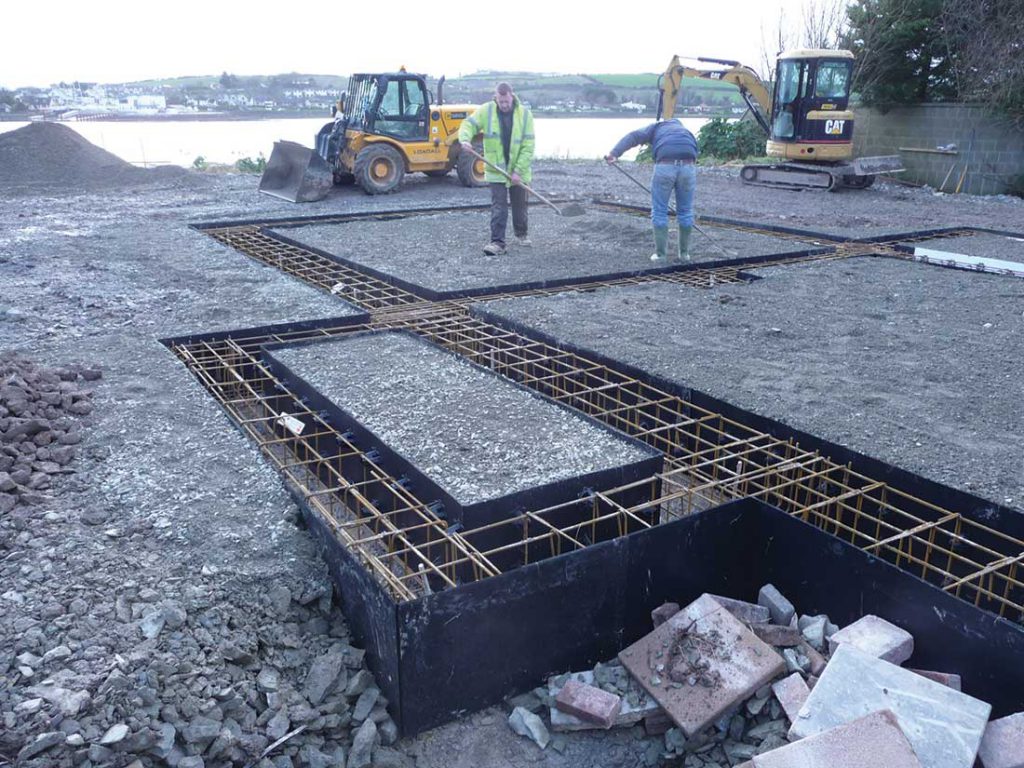 Sand and gravel soils, which can move or settle during heavy rain or long dry spells, often call on raft foundations. Clay tends to compress gradually and houses built on this type of ground may settle gently over time, with the common solution of strip foundations. Peat is mostly found along the western seaboard and midland areas of Ireland and is unsuitable for building on – options are to dig out and fill (with raft or strip foundations on top) or piled foundations.

Rock is very common in coastal areas and appears sporadically throughout the rest of the country. Whilst this is a good base to build on, rock breaking if required is an expensive process.

The most common type of foundations for Irish self-builds. It consists of a strip of concrete laid in a shallow trench, forming a stable base for each wall element. It can be used for both lightweight and heavyweight buildings where the soil is uniformly firm and deep, or for lightweight buildings which have a firm layer over a soft layer. Minimum depth according to NI Building Regulations for example, is 450mm which is required to avoid the adverse effects of frost.

This type of foundation spreads the load over a bigger area of ground and is more expensive to form than strip footings because it is a slab of reinforced concrete the size of the house footprint. The slab is deepest immediately under the outer walls, the edge beam, and load bearing internal walls, cross beam. The steel reinforcement for the edge beams and cross beams is often pre-fabricated and lifted into position.

Mostly used in cases where the soil type is uniform across the site and consists of either deep, soft soil or filled soil which is holding water. Where very wide strip foundations would be required, it can sometimes be more economical to use a raft instead. 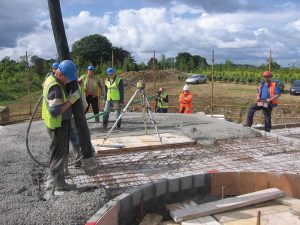 These are concrete columns sunk deep into the ground to support the foundations. Specialist contractors drive them into the ground in sections, or they may use steel tubes later filled with concrete as an alternative. Either way the piles are located to an engineered design, and are very common in filled or soft ground. A mini-piling service is normally sufficient for houses with some companies offering a complete subfloor system. ‘T’ shaped concrete beams support the sub floor slab with the beams in turn being supported by the piles. Concrete is poured between the beams forming a raft-like slab, and the sub-floor is ready for the follow-on trades. The system is engineered to suit the specific house and is ideal for filled ground.

A third system is similar to that above and involves pre-cast concrete planks placed on the beams to form a sub-floor. This is quicker to install but may be more expensive.

When piling isn’t possible, concrete pads can be poured to support cross beams. They are tied together by steel reinforcing to prevent movement. They are made on site from concrete poured into temporary forms.

Rubble trenches we commonly associated with our old stone-walled houses, but it was also popularised by architects such as Frank Lloyd Wright. The construction was usually of a shallow trench, filled with rubble which may or may not have been cemented with a basic mortar such as a clay and lime mix. More sophisticated foundations would use a rubble fill between built stone facings, similar to a dry-stone wall, but in a trench.

Nowadays, these types of foundations are increasingly being used where a light eco-structure is to be built, such as rammed earth walls or strawbale and timber walls. The rubble trenches can also be drained out to a soakaway to improve the site drainage and maintain a dry void under suspended floors. Since the rubble is essentially flexible to some degree, some care must be taken to ensure that either the structure can absorb a bit of movement or that the foundation is suitably compacted and load tested for the avoidance of differential settlement. The technique is generally regarded as unsuitable for bearing on soft or expansive soils.

‘For self-builds foundation design is mostly about matching house type to ground type.’

Earthbags, meanwhile, are of particular value in countries where concrete is too expensive to transport to remote areas, but where spare fill material is plentiful. The method involves filling a trench with bags or tubes which are filled with compacted soil. Often, barbed wire is used between layers to help anchor them together. If there is a scarcity of materials for building more
traditional types of walls and roof, the layers can be brought up into a dome shape to form the walls and roof of the structure. The bags are then plastered to keep out the weather. If the soil is not free-draining, the bottom layers can consist of gravel-filled bags and incorporate a drain out to a soakaway. 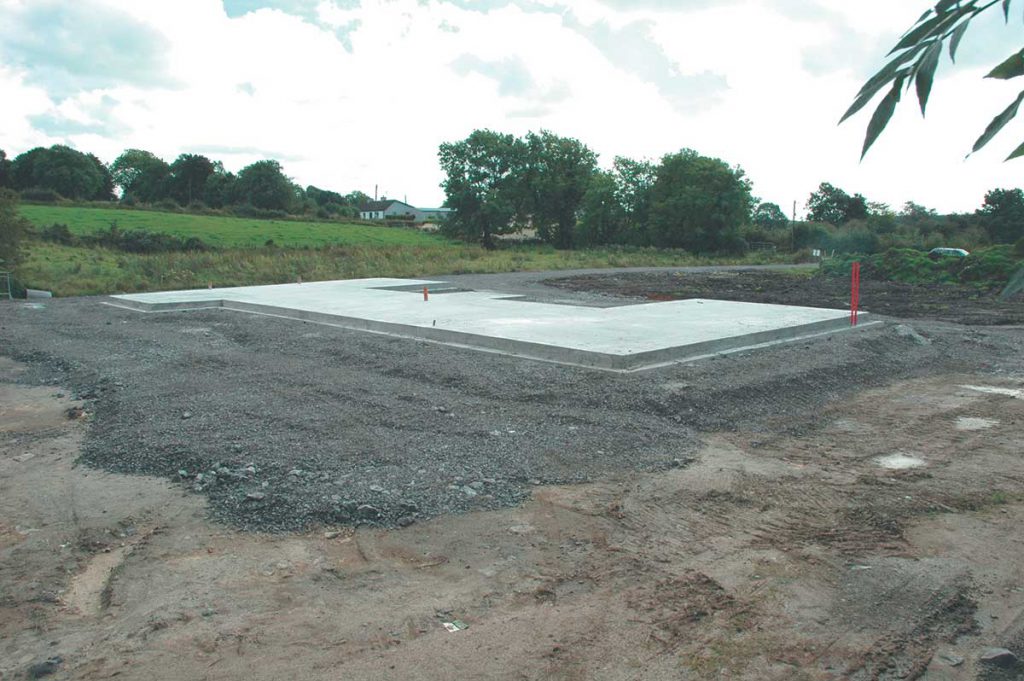 Padstone is perhaps the simplest and most environmentally-friendly of all foundation types. A similar form of foundation is the staddle-stone (also known by various other names), often similar in appearance to a mushroom – consisting of a domed top stone on top of a columnar one, which were typically used to carry the building above ground to prevent vermin infestation of foodstores. These types of surfacelevel foundation – or variations on the theme, will easily allow structures to be deconstructed at the end of their designed lifetime.

Screw piles are now available for small or light structures; they are removable and re-usable too.

Excavations will be required in most situations and ideally should be filled as soon as possible. With strip footings, concrete should be poured immediately to prevent the sides of the opening from falling in. This is vital in wet weather. Open excavations should be fenced off to prevent accidents, even to trespassers. Plan where to place heaps of topsoil or other excavated material so that it will not be in the way of delivery trucks or interfere with the storage of other materials.

Any water must be pumped or bailed out before concrete is poured. In NI Building Control will want to inspect the ground prior to any concrete being poured; this is not a requirement in ROI but should be overseen by your engineer.

The concrete used will depend on the foundation type and the engineer’s specification, and whether or not steel reinforcements are introduced. Make sure the builder does not weaken the specified mix by adding water to it (adding water makes the concrete easier to work with).

Radon is a naturally occurring radioactive gas found throughout the island, but to varying levels. After smoking, it’s the most common cause of lung cancer in ROI. Radon protection normally takes the form of a fully sealed membrane covering the footprint of the house. It is vitally important that the membrane is not damaged during or after installation. Special sealing collars are available for placing around sewer pipes etc. protruding through the barrier. The membrane may be placed either above or below the concrete floor slab.

Below the membrane (usually in the hardcore), a collection chamber is placed, normally in the centre of the house, and perforated collection pipes gather any radon and direct it to the chamber. Different levels of radon are found throughout the country and the design of the prevention, collection and removal system will depend on the levels of gas anticipated for that area.

A pipe from the chamber leads to the exterior where the gas will disperse. If the house is very large, more than one chamber may be required. Other gas risks to be aware of are methane and methane mixtures, e.g. from boggy land or a nearby landfill.

Water and central heating pipes, ducting for telecoms etc. are normally placed on top of the insulation. Waste pipes are usually located under the sub-floor and taken outside the building through the rising walls above the foundation. For this reason it is important to get their location correct and ensure that any bends or joints are correctly fitted as it will be extremely difficult to reach them once the slab is poured. Taking photographs of all of these or drawing a plan to scale provides a very useful record.

Les O’Donnell is a Chartered Architectural Technologist and structural engineer with over 30 years’ experience designing and supervising the construction of new builds. His practice, Landmark Designs, is based in Co Tyrone. All of the information contained in the guide is for information purposes only; professional guidance must be sought for your own specific project. 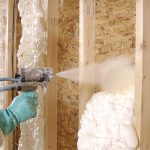 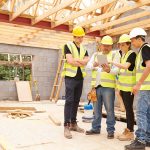