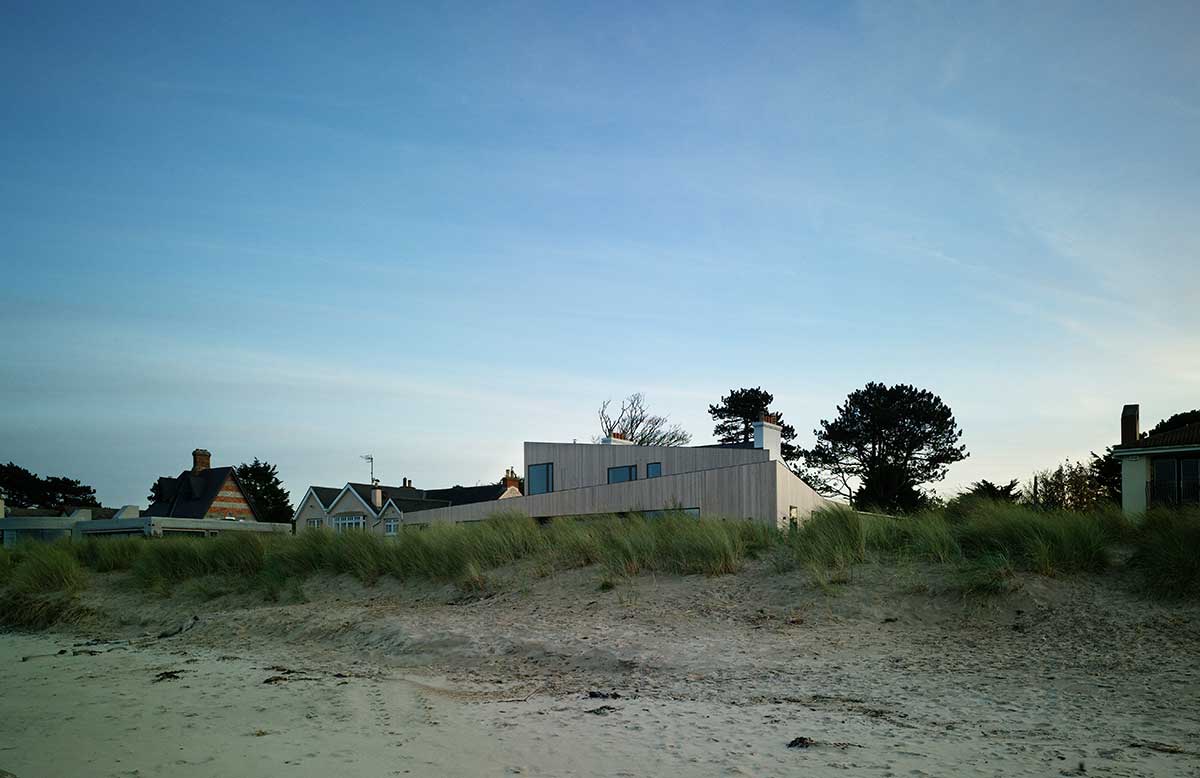 A €1.27 million project in Dublin won Residential Project of the Year at the 2018 Irish Construction Industry Awards (14th June 2018).

Plus Architecture‘s House on Burrow Beach project combines an extension and renovation. A contemporary design faces the views out over Dublin Bay and Ireland’s Eye while the frontage retains the late-Victorian villa’s signature style.

The original house was stripped of the additions made to it over the years, highlighting the original massing and materials.

The adaptation of the protected structure and the construction of a contemporary extension facing out on to a highly visible public beach presented its own set of challenges. The house had to feel like it was a beach house but still form part of the old Victorian villa it used to be.

According to the architect’s brief, the form of the new build element is inspired by the shifting landscape of sand dunes on the beach, with mono-pitch roofs sloping up to envelope the accommodation, and rooflights popping up to bring south light in to a mainly north-facing living area.

These new additions wrap around the existing house and  contrast with it both materially and spatially. On entry into the house a double-height space has been introduced to create a sense of spatial drama, missing in the original house. This reception space leads directly into the open-plan living space to the rear with the large framed views out to the sea. 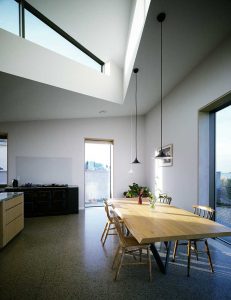 Due to council flood-risk requirements the new build elements of the house were required to be raised a metre above the ground floor level of the existing house and above 4m over sea level, which had the positive effect of allowing greater field of view over the seascape.

The existing house was proposed to be added to the list of protected structures which had an impact on the scope of works allowed on it.

The basic concept was to locate the main living spaces to the rear of the house, with kitchen and dining rooms positioned to take advantage of morning light from the east and the sitting room enjoying the evening sun.

The aim was to provide a four bedroom family home with a variety of different types of living spaces, as well as a study and a home gym on the ground floor. Each living space is located in the plan to avail of the most desirable source of natural light.

Thus the kitchen brings in early morning and midday sun while the living room is designed such that the setting sun shines in from the west.

The extension has been pulled away from the north elevation of the existing house to create a light-filled double-height void space between the old and new, allowing the elements of the house to be read together.

The new element of the building is pulled away from the existing building, both to highlight the differences between the elements and to allow a double-height lightwell to fill the middle of the house with natural light. The house gained planning without any objections and was constructed within the original budget plan.

The restoration involved a thermal upgrade with breathable materials, achieving a B1 on the BER scale. The new building contrasts in terms of its shape and material cladding. The Siberian larch cladding, black metal detailing, bronze anodised aluminium windows and large format glazing also contrast with the lime render, exposed rubble stone wall and slate roof of the existing house.

The low energy house is heated by underfloor heating in a polished concrete floor, powered by a condensing gas boiler. This is topped up by a mechanical heat recovery system which extracts latent heat from the bathrooms and utility areas of the house, and recycles it back to the living spaces. Material specification was also a primary consideration, with natural renewable materials such as larch used wherever possible. The insulation is of a natural fibre and cellulose, and non-toxic paints were used throughout. 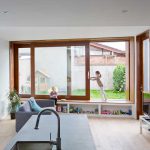 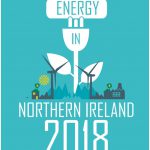