Daire Bracken is an accomplished musician, architect, and yes, self-builder! For his own house renovation project he tapped into all five of his senses to deliver a unique family home.

“To match the neighbouring buildings, I had to choose between brick and render. I chose brick,” explains Daire, whose terraced home is sandwiched between buff brick Dublin artisan dwellings and storey-and-a half rendered dormer houses.

And so brick both inspired and dictated many of the design features. “It started off as a finishing material but ended up representing much more with the masonry stove, which is made up of fire bricks. The heated chambers and channels absorb the heat from the stove into its mass for a comfortable slow release warm surface.”

Even though this form of heating is not that common in Ireland, it’s not unheard of in Russia, Germany and other European countries with harsh winters.

This is in fact where Daire discovered the technology, while travelling with his band around Austria. “I couldn’t get over the comfort of masonry stoves, it gets all your senses going. It was so comfortable I had to replicate it here.”

But Daire didn’t know of anyone building these in Ireland. He had to look further afield. “I tried my hand at it on a project in Scotland, with an expert from the Czech Republic. We had to lodge it with Building Control, which wasn’t easy. How do you prove compliance when there are no proprietary products? In a way it’s sad to be moving away from this old craft, so it was appealing to me to experiment with it and eventually introduce it into our contemporary Dublin home.”

The stove mason came to Ireland to work with Daire on the Dublin project. “This was a time when everyone had to appoint an Assigned Certifier on their build, before the introduction of the exemption for self-builders (opt-out). I appointed myself as the AC and applied the same due diligence we did in Scotland. I’m not sure a novice selfbuilder would have been able to get an Assigned Certifier to sign off on the stove, it’s so unusual to do here I don’t know who would have had the expertise to oversee it.”

Instead the challenge for Daire came down to building it. “We had to do it ourselves, there was no one to turn to. Sourcing the materials alone was a challenge. I was looking for clay for ages and ended up having to get it from a potter. It’s just so much more difficult when you’re not ordering a product with a brand name!”

“The builder’s merchants were in fact very intrigued by my order of fire bricks – I was ordering pallets of them. Most people order a handful to put around their stove. For the insulation, one that could withstand the high temperatures, we had to order it online, the flue connection was also non-standard and therefore hard to find.”

But the experience of building it made up for the slow start. “Volunteers pitched in and for a couple of days, there was a real self-build buzz around the place. The design was the stove mason’s but I’d learned quite a bit in Scotland so was able to help direct the building work too. I won’t lie, it was a lot of work.”

If there’s one thing that Daire says should theoretically be changed, it’s the location of the stove. “We should have centred it in the house so as to benefit from the heat from all sides. But that wouldn’t have looked right so I’m still happy where it is.”

The tactile nature of the masonry heater is echoed by his extensive use of concrete. Once a hidden building material, it has become a design statement in many contemporary homes.

“You might think concrete is a cold surface but it’s actually very tactile and comfortable,” he says. “We associate concrete to the damp, cold outdoors but in reality it has very different properties, it’s got the same radiant comfort as timber.”

“In Italy they sit on travertine in their hot stone spas. It’s very comfortable. Our floor is always warm in winter with the underfloor heating and it’s embracing, comforting. And with rugs you can soften the visual impact further.”

Both in terms of colours and materials, Daire kept the palette as limited as possible. With the frameless windows, the undeniable visual aesthetic is complete.

But as a musician, acoustics also comes into play. “If there’s one finish I wouldn’t be happy with, in terms of how the sound propagates, it’s plasterboard. Flat surfaces really don’t do it for me, which is why I like brick and concrete surfaces. They reflect sound much more deeply, it gets to bounce around a bit more. The vaults in the music room create pockets, which help focus the sound.”

The funny things is, none of the acoustic aspects were deliberately thought out. “I didn’t consciously go out to build a house I could play and listen to music in, but that’s how it turned out.” And if you look up, in the vault there are openings within the bonding patterns that form niches protruding as shelves.

As for the gustatory, Daire spends plenty of time in the kitchen experimenting, as much as he does with his music. 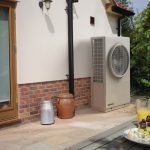 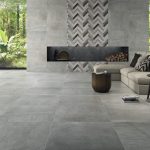