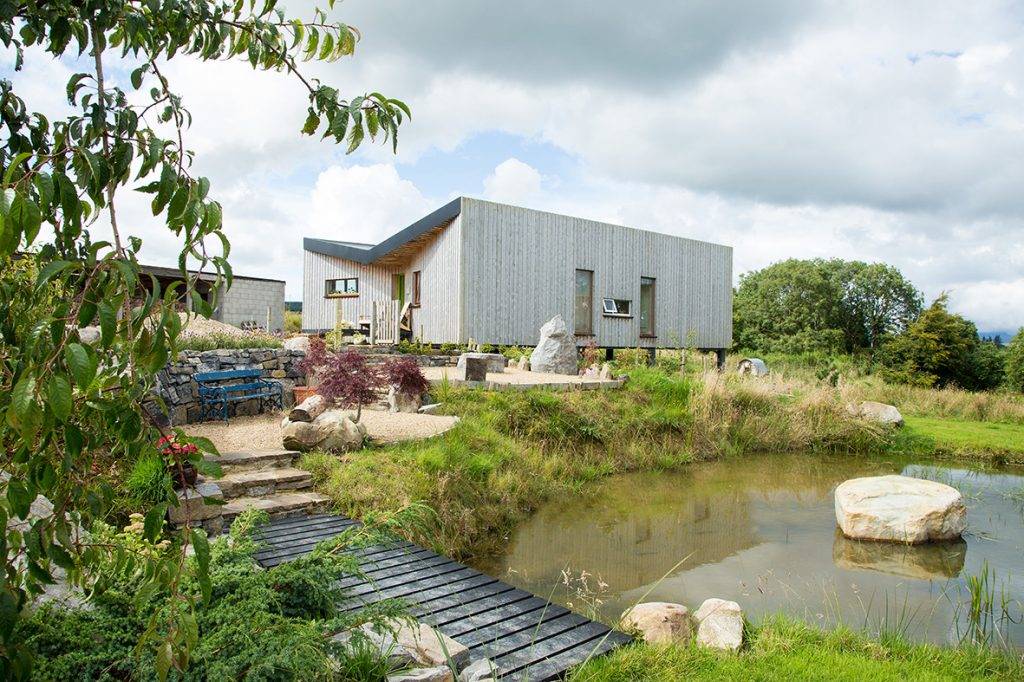 Woodturner Max Brosi of Manorhamilton Co. Leitrim, dreamt of building his own abode for most of his life but it wasn’t until he met his now-wife Anna Marie that the decision to self-build was made.

As Max points out: “When two like-minded people put their energies together a lot more can be accomplished than going it alone.”

“Logic came into it,” he adds. “Rather than buy, we thought we’d be much better off building – financially and we also knew we would get the style and quality we wanted.” The couple found a site on Anna Marie’s dad’s farm that they really liked and subsequently bought.

“We started by looking at the work of Walter Segal but his timber post method on concrete pads didn’t convince me in our Irish weather, whose main feature up here in Leitrim is wind driven rain! While I really liked the idea of building the house on stilts, I opted for steel reinforced concrete stilts, supporting a galvanised steel girder frame onto which the house is bolted.”

Anna Marie’s brother, Michael, is an architect and his help and advice on the building regulations as well as on the structure and content of the planning package were invaluable to the pair of self-builders. Indeed, such a customised design required exceptional attention to detail. “As we were going for something quite unique we made sure to overspecify wherever we could,” says Max. “We felt more confident adding to the construction details to get that extra peace of mind.”

For instance for the suspended timber floor Max opted for 9x2s with herringbone bridging. “This takes most of the bounce out of the floor and gives it great strength and rigidity. I got the tip from an old friend of the family who has spent his lifetime restoring Georgian houses.”

Before the planning stage they lived on site in a caravan. “We got to know the wind directions, where the sun moves and this verified our thoughts on the orientation of the house,” says Max.

“We started with sketches on paper and used a CAD package to draw up plans,” he recounts.  “The geographic orientation of the design was inspired by the Newgrange principle. The central space is aligned with the centre of Glenade valley; in midsummer the sun sets in the middle of this valley and shines straight through the centre of the house, illuminating the back of the front door.” In fact the overall form of the house is “a culmination of design ideas, material considerations, and functional layouts,” says Max.

“The majority of the house is open to the sun: the living spaces face south, with the kitchen in the SE to get the morning sun, and the sitting room in the SW for the evening sun and sunset views over the surrounding farmlands.”
“Our bedroom faces NW so there’s no direct light into it but that’s how I like it – I like to feel cocooned. The layout works very well, we have no kids so it’s just us!”

One unusual feature – by Irish standards – is that there is no back door but there are French doors to the south which will eventually lead onto a patio that’s due to be built this summer. “Convention says a house needs a back door, but for us there was no reason for one,” adds Max.

The planning application was approved six years ago and at that time the planners requested some changes to Max and Anna-Marie’s well-crafted house positioning. “They wanted more trees to be planted and the home moved closer to the road – we had to give them a detailed explanation of why moving the house wouldn’t work, but we were happy to plant more trees,” explains Max.

“Our original location was sheltered from views as it was located behind the apex of the hill. Where the planners wanted us to build was lined with trees which would have blocked out the sunlight in the winter time, limiting the passive solar gains. The planners were very supportive and understood what we were trying to achieve, and in the end removed that condition.”

“We were very lucky because planning restrictions were tightening due to inadequate percolation. Thankfully Leitrim County Council specified a septic tank to reed bed and willow bed system, which is lined with geotextile, volcanic stone and is impervious to the surrounding land, and would have been our first choice anyway. Every year or two we have to coppice the willow, which we then replant in the hedgerow.”

Anna Marie and Max were still in the caravan when they started building. “At that stage I’d just finished my teacher training but didn’t have a job yet so took a year out to dedicate to building the house.”

“I had two friends helping at different stages, one was with me for about half the build, but being a trained furniture maker and lifelong woodworker I did as much as possible myself. The only building stages we subcontracted were the plumbing and electrics.”

“In a modern world where we are rapidly losing skill and self-reliance, it’s a great feeling to design and build your own shelter, knowing that you are responsible for the success or failure of the project, it’s a very ‘connected’ process.” He’s learned from the experience too. “A friend and I spent a month taping and jointing the internal plasterboard wall surfaces. That was a pretty grim month, sanding the plaster off the ceilings between coats. In the end I should have got it skimmed. That was one of the few areas I would do differently.”

Max mostly used plasterboard thinking it would be cheaper than his preferred choice of tongue and groove timber slats. “If I were to do it again I’d put more tongue and groove on the walls, we painted it in the bathroom, and part of the sitting room and kitchen and I love it,” he says.

“The plasterboard took five weeks, all in, to install and tape and joint so in terms of cost it didn’t work out that well, and the tongue and groove looks much better in my opinion. I love the painted white Scandinavian style finish, it provides planes of light and shadow which add texture and interest.”

The style of the house is a very personal and eclectic mix of Japanese, colonial and Scandinavian influences. “We restored and resurfaced an old Edwardian roll top bath and have tongue and groove panelling to match in the bathroom, with a picture frame window at bath level so we can count sheep from the tub.”

But in some instances, cost considerations drove their decisions. “I considered building the kitchen myself but when I priced it, I realised it would have been more expensive for me to spend the time and money on it, rather than work with the economies of scale that a specialist supplier benefits from. Besides I don’t like fitted cabinet work, I did too much of it when I was younger!” While there is no utility room, Max and Anna Marie made sure they installed plenty of floor to ceiling cupboards, two of which are used as a pantry, another for the vacuum cleaner and brushes, the rest for kitchen items.

In addition to the panelling, Max says there’s something else he’d add and that’s a mechanical ventilation system. “We installed 8 inches of sheepswool insulation from Wales and made the building airtight with a mind that opening the windows would be enough to provide fresh air,” says Max.

“On the southern end there is no problem with condensation, but the bedroom and bathroom that are north facing are showing small patches of mould on the bottom of the reveals even though there’s the same amount of heating throughout the house,” he explains. “We have the same problem in the spare bedroom where there’s just a trickle vent on one of the windows. Luckily this problem is easy to remedy. This summer we plan to retrofit a mechanical ventilation system and replace the plaster slabs in the reveals.”

“My concept of luxury is pretty basic, and quite close to the old Roman definition: running hot water and plenty of it! On my wish list was a wet room with a large powerful walk in shower, and that was thankfully possible.”

Heating and hot water for the whole house is fed off an 18 kW solid fuel (wood and turf) stove. “The copper pipe loop between the hot press and the stove is short, running just 1.5m, to avoid heat losses,” points out Max. “We use the immersion for hot water in the summer. We did the maths for solar panels and felt the breakeven point would have been too long, with too few advantages.”

“No matter how much you research and plan, you learn through the process, that’s the fun part. In retrospect, if I was doing it again I would install a German ‘Kachelofen’, a type of masonry stove that uses very little fuel and circulates hot flue gasses through a network of ducts to extract the maximum heat energy. These have been used in the alps for centuries. However it’s quite expensive to get one installed in Ireland.”

What’s clear is that Max’s connection to his surroundings and his woodturning work have conspired to create a truly unique and embracing house. “What I love most is that it’s bright, peaceful, low maintenance and cheap and easy to heat,” he adds.

“After we’d been in the home for a few years we built a veg garden with raised beds. We put in the dry stacked blocks, gravel, a weed-control fabric and then we had to wheelbarrow the weed-free heat-treated soil on top, adding fertilisers – cardboard, seaweed, rotted-in green manure.”

It really pays dividends too. “With the greenhouse we get early potatoes, tomatoes, chillis, salads, and the list goes on. Outdoors Anna Marie grows kale, onions, carrots, parsnips, garlic, sprouts, and fruit bushes. Basically for vegetables we’re self-sufficient,” he adds. “We have hens for eggs and the chicken house is on stilts too above the septic tank, it doesn’t smell but to the finely tuned nose of a predator, we have foxes around here, the scent of humans is enough to keep them at bay.” 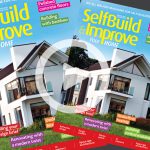 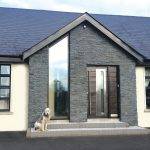