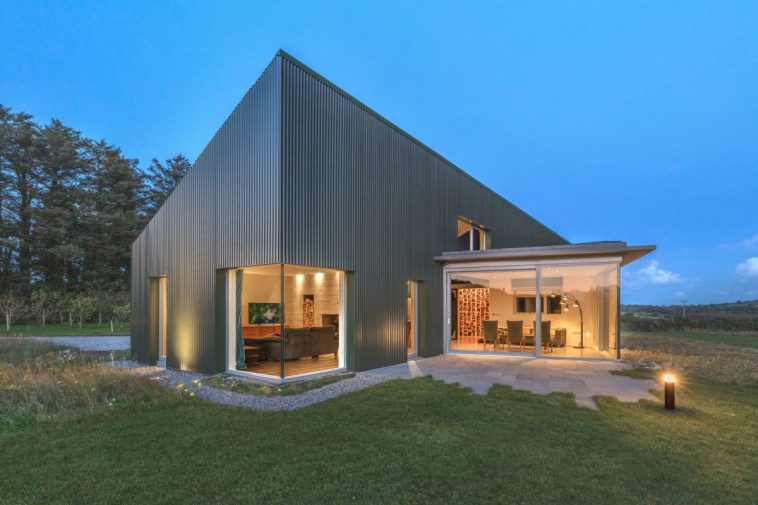 The challenge for architects is to get the houses they design in the countryside to blend into the landscape. When it came to his own home, Andrew O’Brien came up with an ingenious solution.

The process was the same as for any project I take on; we had a list of things we wanted out of the house and a specific location in which to put it.

The choice between traditional and modern is a question of taste but also rooted in the features of the land, such as orientation, views, overlooking, overshadowing, rural vs urban, exposed sensitive landscape, etc.

This site is located within an agricultural setting, backing onto the edge of a mature forest. For this reason the house is clad in deep green corrugated metal sheeting to reflect the farm sheds scattered about the landscape, but with crisp modern and highly detailed finishes and junctions.

Was planning permission hard to get?

My research had shown that a couple of planning applications for traditional bungalows with white plastered walls had been refused on the road due to the elevated nature of the sites and the visual prominence of the area from a busy national road passing about 700m south of where we planned to build.

Once I realised that, I knew that the only successful solution to a house in this location would be to effectively make it disappear from that southerly aspect and main road.

How was the project managed and built?

Separating my business office, a log clad steel shipping container, out of the house and building it before we started building our own house was one of the best decisions I made on the project.

It meant that I was running my day to day business from the building site and should any problems or queries arise it was a short walk across the site to resolve the issue and keep the momentum going.

I knew that I needed someone I could trust to help with the running of some of the day to day management of trades and also have someone to bounce some technical details off for those times you are so immersed in the decision making you can’t see obvious alternatives.

That foreman job could only have been given to one person, a local carpenter who takes a lot of care and pride in his work. I couldn’t think of anyone better to help us.

NI calling ROI prefix with 00353 and drop the first zero

How did you go about hiring your foreman?

I first approached Declan about the possibility of helping to build the house about a year before we broke ground so we could review the method of build together and highlight any issues that could possibly crop up. We know each other very well and I trusted him.

Unlike others who turn up in the morning, do their own job and go home, Declan is always interested in how he can do his job to make it easier on the next trade. You don’t get that attention to detail from everyone. Our arrangement was verbal; he kept track of his time and I paid him by the hour.

What construction method did you choose?

The house is built on a passive insulated slab. Declan had no experience with this type of foundation system but as a carpenter had all the necessary skill and attention to detail to tackle it.

A lot of attention had to be given to the setting out of the passive slab; the width of every window and door was set on this grid to suit the width of a corrugated metal sheet therefore eliminating the need for any cutting and waste on site. Openings are either one, two or three corrugated sheets wide and this had to be factored in from day one.

For continuity of the external envelope and to eliminate thermal bridges, the walls and roofs were insulated externally. Similarly, the roofs are constructed as warm roofs, again avoiding any thermal bridges.

External finishes are kept to a simple palette of two: corrugated metal and timber. The walls and roof of the main rectangular block are clad in a deep green corrugated metal cladding while the ‘pop outs’ to the north and south of the main block are clad in two different methods. The first is a waney edge rough ship-lapped timber board with the bark adhered to it, giving the building a rustic look and tying it into its forest roots. The second method consists of vertical prepared timber latts in a hit and miss pattern, again to reflect the forest setting.

The strategy from the outset was to insulate and make the house airtight to the highest standard possible to eliminate the need for space heating as much as possible.

The original intention was to fit a small gas boiler to provide hot water as the thermal mass and heat gain attained during the day would provide the little heat needed during the winter months along with the stove in the main living space.

However, when we analysed the cost, there really wasn’t much difference in the cost of installing a small air to water heat pump against the gas boiler and submerged tank option, about €1,500 to €2,000. That excludes the underfloor heating pipes as I had them in already as a ‘just in case’. This is comparing the heat pump system itself with the gas boiler, insulated cylinder, submerged LPG tank, ground works, etc.

So, we installed the heat pump and as expected it’s being used predominantly to heat our domestic hot water; the space heating is very seldom called upon. We installed a heat recovery ventilation system to circulate fresh air and again the heat recovery function is on bypass most of the year.

My overall energy bills for the house for a year are about €800. Over the past 18 months or so, the space heating (underfloor heating) typically kicks in for the north facing playroom and bathroom in early December for about an hour in the morning. This heat is required for these spaces alone until the beginning of March and after that the heating is not called upon again, unless we experience a cold snap.

More From: Other key structural decisions 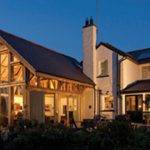