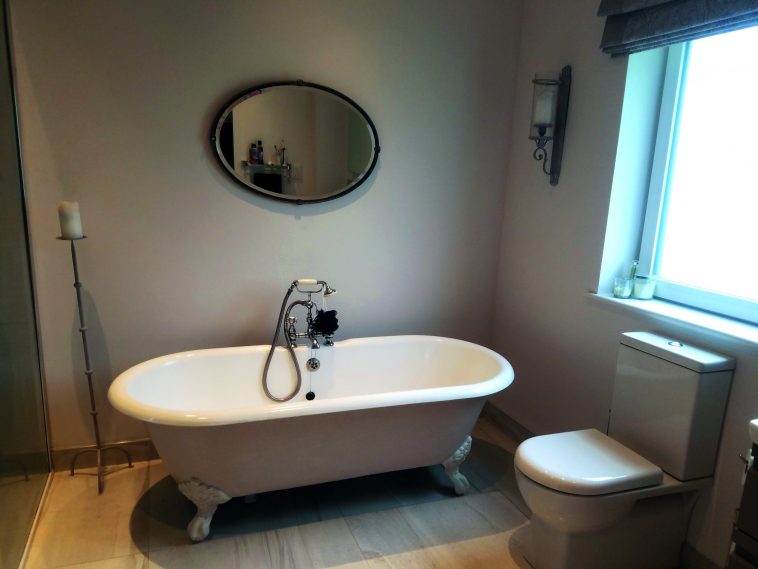 Designing, costing and fitting out four bathrooms was a bit of a headache in the midst of our new build. But we survived!

When we were building our family home, we had four bathrooms to fit: a family bathroom, a large ensuite with bath, a wc and a compact ensuite. We didn’t have much of a budget as we had spent our contingency in the build framework.

So it became my intention to complete one bathroom at a time and move along as we could afford it. This also gave me breathing space to make confirmed and reasoned choices.

However, during the course of the build we were catapulted to proceed, as our plumbing and electric quotes included complete installation. It was going to be considerably more expensive if the workers were to return many times.

Notwithstanding, it would have been difficult to get the plumber and electrician to work in synchronicity when we needed them. And so it became a must to kit out all the bathrooms with sanitaryware, and consider working on finishes later.

I had started planning rooms a year earlier by going to a local bathroom company and got a lot of information there, mostly a sales process telling me what I needed.

Also, this company spent a lot of time advising on toilets and self-closing easy clean seats. This convinced me that I had to invest in proper toilets and seats and not just one from a local hardware store. That was a good call.

There’s no substitute for visiting a showroom, where you can see and touch the ceramics, furniture, lighting, taps and showers. It pays off to go shopping to various bathroom companies; make appointments and let them know you mean business.

It’s a good idea to come armed with a floor plan that includes your plumbing and features constraints. Usually the plan is obvious, but showrooms can be invaluable for the little tips; talk to a professional designer and get free advice. And listen to your friends and people who have survived the process. Everyone wants to tell their story. 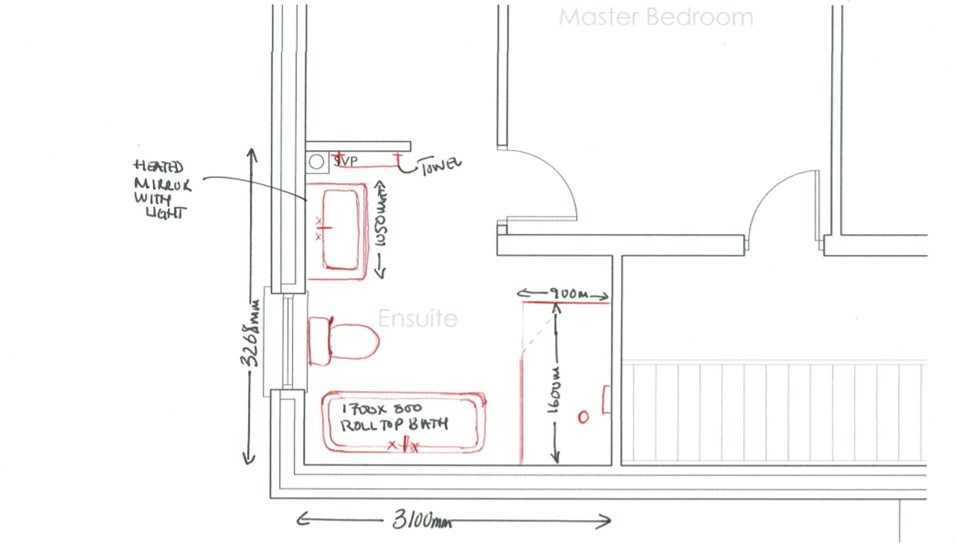 I put together a mood board, gathering photos of bathrooms I liked from online sources. Visiting real places such as new public buildings, hotels and clubs gave me a more tactile sense of what’s on trend, so I combined both sources of inspiration. This process of gathering a scrapbook really helps focus the mind when bathroom shopping. It might also come as a surprise to learn what you consistently like!

The scrapbook will help determine the function of each of the bathrooms: to indulge and relax in or a practical place to get washed/showered asap? Knowing all of this will inform your style and finishes. And remember: anything goes in a bathroom, from eclectic chic to classical.

At this stage I made a rough pencil sketch of the room to decide where to place things, taking into account:

How long is a piece of string… water outlets, electrics, plumbing, fitting, tiling, all items need managed. It’s important to have everything ready to go before you start with a clear plan. Estimate £5-£7,000/€5,500€8,000 for a standard bathroom.

An ensuite can be overhauled or finished for £1,500/€2,000 with a little thought. It helps to know your marketplace and look around different showrooms to help you make savings. Regardless of cost, I would suggest adding 10 per cent to your budget for contingencies.

You can get a one stop shop, total fitout company who will do all your works and this can be effective for time, but will inevitably cost more.

Start by showing your mood board to a designer to ensure your goals are affordable and realistic. As a rule of thumb an installation should take around two weeks with professionals working with other professionals to accommodate you.

If you have the budget, and have the time to plan, you might consider investing in technology. Apart from low energy LED lighting and PIR sensors (lights come on when you walk in), TVs are fast becoming more common in bathrooms along with wireless Bluetooth speakers.

In making our initial plan, the first ensuite bathroom came in at £11,000, which included a cast iron bath at £4,500. I was in a blind panic as I knew that was well out of our reach. At the time, I made a comment about a particular vanity unit (with a mirror, it was costed at £2,200) I said it was really my favourite but didn’t choose it as I knew it was too expensive.

It was modern, dull grey and transpired it hadn’t been popular. The owner offered it to me ex display for £800 with sink and tap. A ridiculous amount of money for me to spend at that time, but I loved it and it was still a saving, so collected it a week later.

I then started to look at second hand baths and sanitaryware and luckily found a large cast iron bath online, double ended, with middle shower mixer tap for £200. It was an hour away. I made a call to a local bath repairer and he confirmed he could sort it out regardless of condition. As he came recommended, we decided to risk it.

The following Saturday morning with three young kids in the back of the car, we hitched up the trailer in the pouring rain. The bath was in good condition but still needed TLC. We got it into the trailer and drove straight to the repair man (as he was en route home) to seek his assurances. He was great and told us not to worry he could sort it once it was in place. We drove home, manhandled it into the garage and the truth is, a hedgehog nestled in and hibernated for the winter! But once installed the bath repairer did work wonders.

I was mindful of costs and I was worrying as our funds were quickly disappearing. Luckily an opportunity presented itself, in that, I made a decision at this point to change things with our roof. This recouped about £4,000 from our main build budget, and gave me hope.

From there, I went to a bathroom showroom in Belfast for inspiration and spent hours listening to sales pitches and bathroom facts. It was painful and exhausting, not to mention time consuming.

I then went to my local hardware centre, where they were very helpful and considerate of my lack of budget. They offered to show me their ex-display section which put me on a path to go around all the hardware outlets looking for ex display. 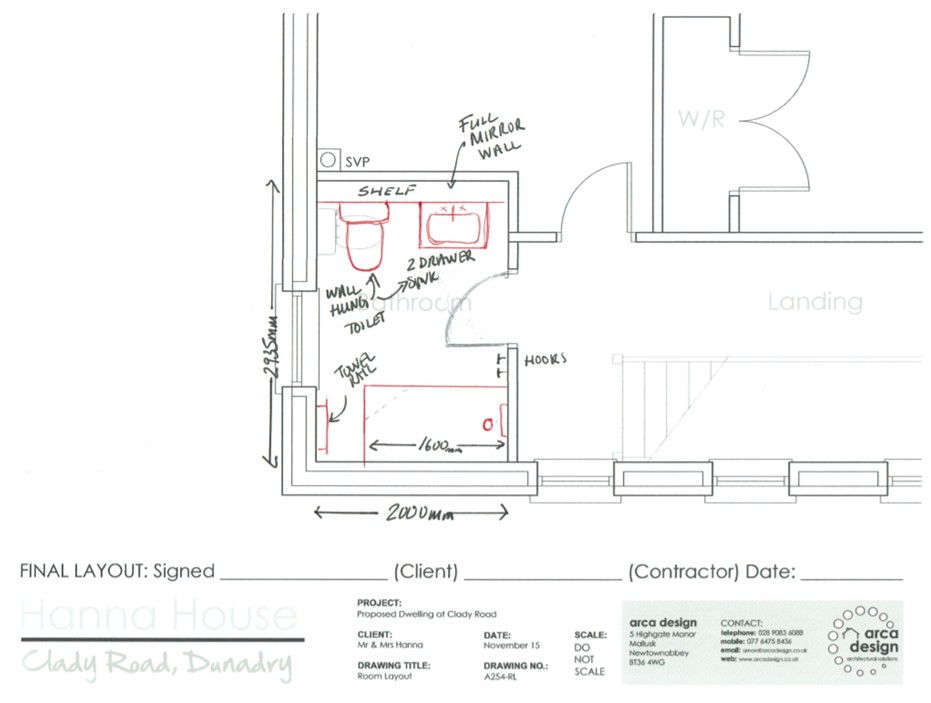 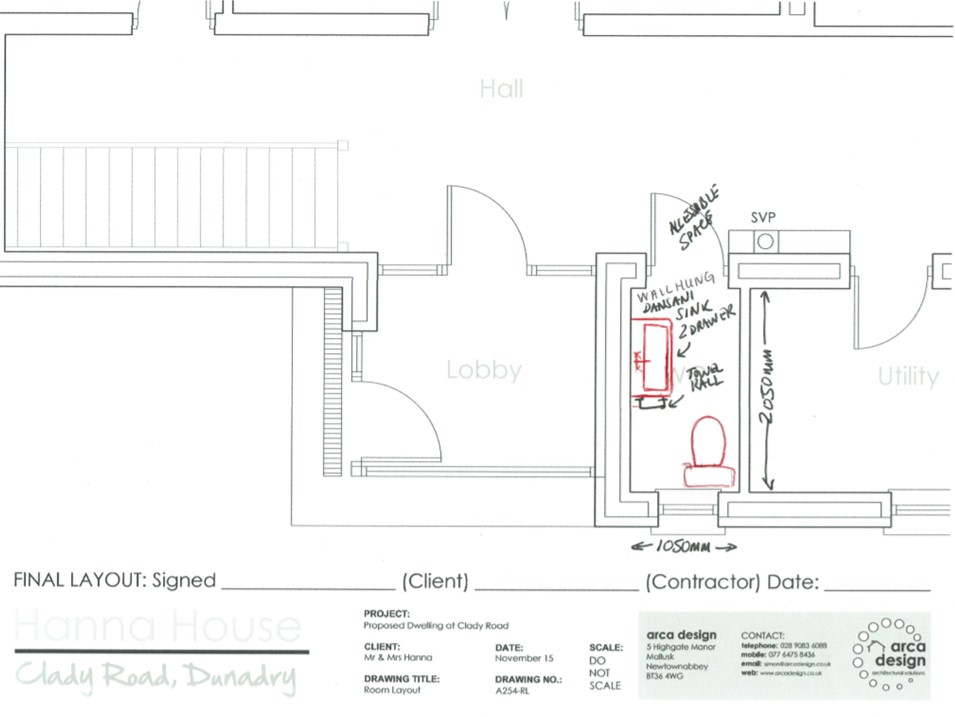 I copied our plans and slowly figured out what would go into each bathroom, worked out sizes and plumbing restrictions and so forth, and proceeded to identify a purchase list for each room. I learned on the hop. I also decided not to put a bath in the family bathroom upstairs to save money. Instead I enlarged the shower tray and it’s now a family shower room.

Some outlets were very good and kept my number and called me when they got certain items. I bought all four vanity units ex display, remarkably they are all the same brand but from different showrooms. I bought most of my taps that way too.

I did have to pay full price for my shower trays but got reasonable rates. I was able to buy two ex-display shower enclosures which also helped. In total, I purchased a bath, four toilets/seats, three showers, including trays and cubicles, four vanity units, lighted mirror and taps for about £8,000. A bargain. Tiling, lighting and other finishes came after.

My chosen ensuite floor tiles I costed at over £100 per metre in a particular Belfast showroom. In fact, after seeing them, I didn’t want to look at any others. They had ruined me for choice! I went for months searching for an alternative but decided to leave it.

The tiles were what I wanted and nothing else could compare. I focused on the other bathrooms, until one day I walked into a little showroom to purchase tap tails (as they were missing from my ex display set) and the very same tiles were on sale at £32.95 per metre. I was ecstatic when I found them, as I didn’t want to compromise. So that was full steam ahead.

Another tile I liked for the shower room and compact ensuite was £49.99 per metre and I needed 32 metres. Three weeks after seeing them, I headed back to the tile showroom for inspiration and they were reduced to end of line. What a find. I purchased a job lot of 46m for £400, a saving of £1,900. They weren’t my first choice at the time, but now, they are my favourite.

Of course, it’s nice to get the finishes at the right cost, but labour, grouts and adhesives are also to be costed.

One thing is for sure, a good tiler is worth his weight in gold, simply as he can make or break the look. So, if you get someone recommended, go and see their work and stick with them. Talk to them, book them in advance and keep talking to them until it’s time to bring them on board. In relation to finishes I would also say do the same for a painter for he too can make or break the look.

Of course, all that seems pretty straightforward. In reality when you are building or renovating, you have to juggle so many people, main builder, plumber, tiler, fitter, joiner, electrician and meld them all together to get the job done.

The bottom line is, know exactly what you want and stick to your plan. This will ultimately help the workers get on with the job.

More From: Choosing the bathrooms