Fibreboards have long been familiar as the acronym MDF which actually stands for medium density fibreboard. They are made from wood fibre reconstituted using the natural resin present to bond the fibres under high temperature and pressure. Also available are LM (low density) and HM (high density) board. They are ideal for adding veneers to. Ireland is home to a large MDF manufacturer based in Clonmel.

Hardboard is a fibreboard that has been subjected to a higher temperature and pressure than MDF and is used in furniture making and wall/ceiling panelling for example.

Glulam is the product of spruce and pine, parallel layers of which are glued together under high pressure. The glue is weather resistant and can be either dark or light and the product has excellent fire retardant qualities being slow to char and any uncharred sections retain their strength. Because it can be shaped and is exceptionally strong, it can be used to create large, airy buildings. Although considered to be a very modern form of construction, it has been around since 1860 when it was used to build the assembly hall of King Edward College in Southampton! The glue then was casein adhesive, made from cow’s milk and not moisture resistant, so things have moved on…

I-beams are manufactured from kiln dried C24 softwood and OSB and used as an alternative to conventional timber joists because they can be used with pre-formed flooring; strength to weight ratio allows longer spans and easier handling; resistance to shrinking and warping helps to create quieter floors; dimensions are consistent and they’re easy to install, cut and drill for services. I-joists are the most commonly used type of engineered wood in Ireland.

End product
Most timber frame houses are constructed from a factory made wooden frame (spruce, kiln dried and strength graded; with the implementation of the Eurocodes structural timbers in general are all graded C16 to C24), with one side sheathed using plywood or OSB with breather paper attached, then insulation, dpm (damp proof membrane) and inner linings added after erection on site. Timber should be stored clear of the ground and protected from the weather.

Roofing uses kiln dried softwood from C16 to C24 grade for trusses, tiling battens should comply with BS 5534 and be treated. Engineered roof trusses form a frame of beams joined with steel nail plates applied under high pressure. The Fink is the commonest type of roof truss; rafters have the same pitch and the timber as a whole forms a ‘W’ shape. Made in a factory and delivered to site ready to erect, thus saving considerable time over the building of a sawn or cut roof, the disadvantage is that standard roof trusses do not allow for a room in the roof to be created. If you wish to build this in, special RIR (room in the roof) trusses should be ordered.

Floor joists are mainly spruce because of its availability, low cost, and strength although it’s not exceptionally strong. It should be kiln dried C16 and grade stamped I.S. 444 or BS 5268. For external use the timber should be pressure treated. Despite the many varieties, 80% of wooden flooring is made from softwoods such as Red Deal and Larch or the hardwoods Oak, Walnut, Birch, Maple, Cherry and Ash. In addition there are numerous exotic tropical species such as Merbau, Ipe, Santos Mahogany, Teak, etc.

Studding is the framework for walls, ceilings and partitions, kiln dried to C16 and once again spruce is the popular choice for its low cost, strength and ease of working with. Planed surface or CLS timber (Canadian Lumber Standard) is frequently used for studding also.

Disposal and recycling
Timber can generally be reused, and in some instances, the older it is the better – floorboards for example gain an attractive patina. Of course that’s assuming there’s been no fungal or insect attack on the wood. If there has been, you may need to burn it. Dry rot for instance can readily spread if the right conditions (humid) are present. Check with your local council about disposal as you’re unlikely to be allowed to burn anything in your garden.

Used timber, and residues from processing, are commonly recycled as fuel (including electricity generation and pellets/briquettes) and shredded for animal bedding. Composting of solid wood, even when shredded, would be an extremely lengthy process as it is very low in nitrogen.

The wood you choose can be either softwood or hardwood. Softwood such as pine, larch and spruce is less expensive than hardwood, but there is a much greater variety of types with hardwoods, and they are also particularly durable and hard wearing. Common European hardwoods are oak, maple, beech, ash, birch and chestnut. Tropical hardwoods include mahogany, Iroko, Meranti, etc. Having said that, Honduras Pitch Pine is a softwood grown in Central America that is harder than either cherry or walnut, so seek specialist advice because there are tables giving the hardness, durability and wearing qualities of species.

Spruce and pine are the most frequently used species for construction. They are all marked with identification letters and figures stating the species (normally EWER, European Whitewood/European Redwood), Irish Standard, British Standard or European Norm (I.S./BS/EN), the condition of the timber at the time of grading (KD = kiln dried, WET = moisture content greater than 20% or DRY = moisture content less than 20%). This system applies to most of the wood from Europe, Scandinavia, Canada and the USA.

Gillian Corry & Astrid Madsen. Technical queries related to timber and its utilisation can be submitted to the Woodspec website www.woodspec.ie or emailed to gordonknaggs@eircom.net. Other useful websites include www.teagasc.ie, www.coillte.ie and www.coford.ie; Carpenter Oak, Totnes, Devon www.carpenteroak.com tel. +44 (0)1803 732 900 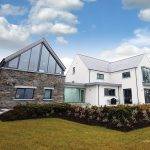