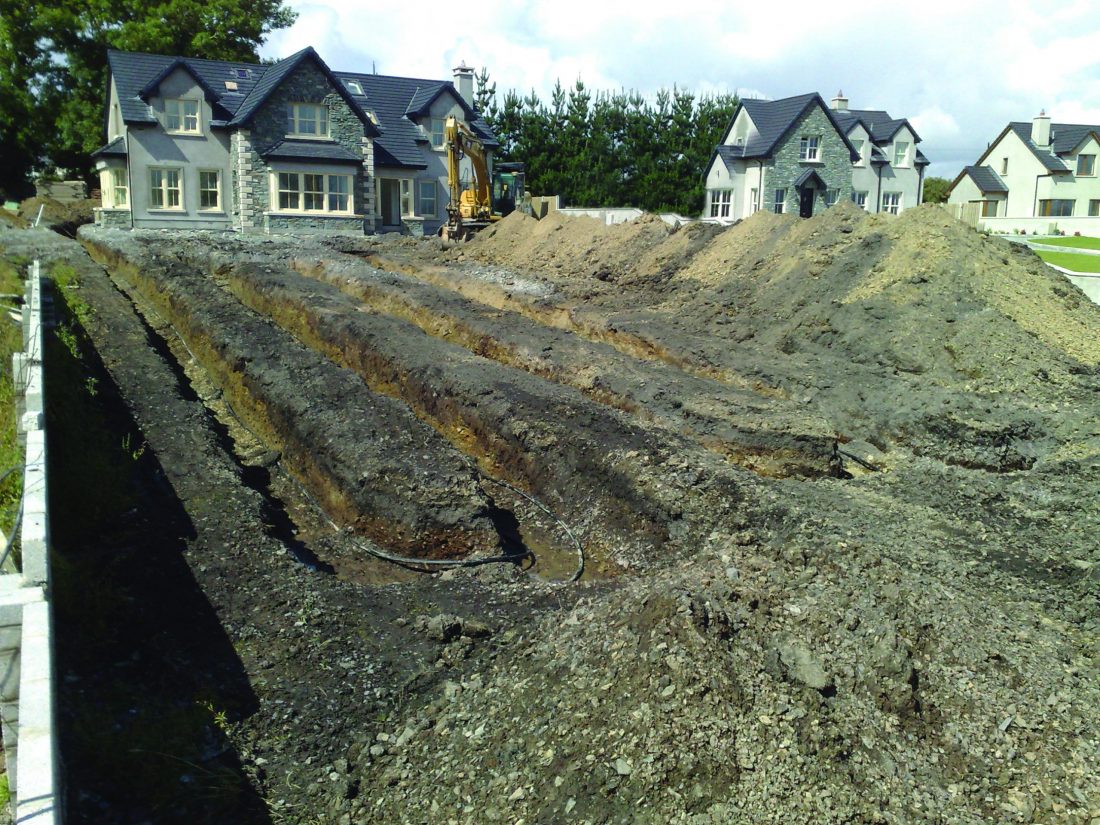 Even though ground source heat pumps are relatively expensive to install, they’re well worth considering for your new build.

As the ROI government plans to ban oil and gas boilers from new builds, in 2022 and 2025 respectively, heat pumps are fast establishing themselves as the go-to heat source for new homes.

In fact, in 2018 over a third of new homes installed heat pumps as their main heating source; oil was only installed in two per cent of homes with gas remaining the dominant player*

As the new NZEB building regulations come into force on the 1st of November (see page 84), it’s likely an ever increasing number of newly built homes will turn to heat pump as the technology of choice as it ticks the renewables box at the same time as providing heat, hot water and in the case of exhaust air heat pumps, ventilation.

With all heat pumps, the correct product selection, sizing and installation
of the units are what will make the heat pump work to its highest possible
efficiency, converting one unit of electricity to four or more units of energy for your space heating and hot water.

A rule of thumb is that air to water systems give a seasonal average coefficient of performance (COP) of at least 4, with many achieving 5+, while ground source heat pumps will readily yield a COP of 5 or more.

Compared to gas and oil the savings are high; a heat pump should run at about half the cost**. Most heat pumps provide space heating at a variable flow temperature (depends on the weather) of 25degC to 45degC but hot water has to be regularly brought up to 60degC, which is supported by the
majority of heat pumps nowadays without the need of an immersion. 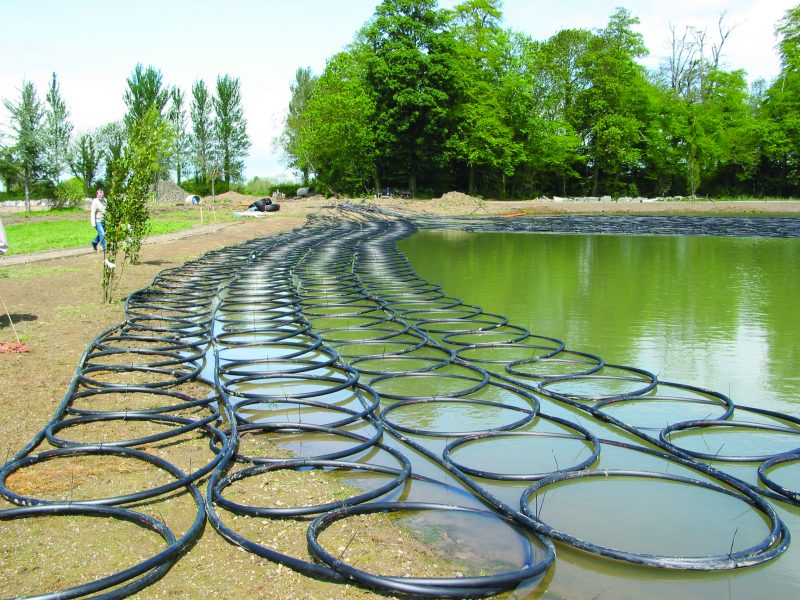 Heat pumps are fined tuned, with weather compensation controls, to work
at the lowest temperature possible on a continuous basis. Temperatures can also be fine tuned or adjusted on the control system in the house and many nowadays offer app or PC control too.

Leaving exhaust air heat pumps to one side, which combine mechanical
ventilation and a heat pump in a single box, how do ground source and air source compare? 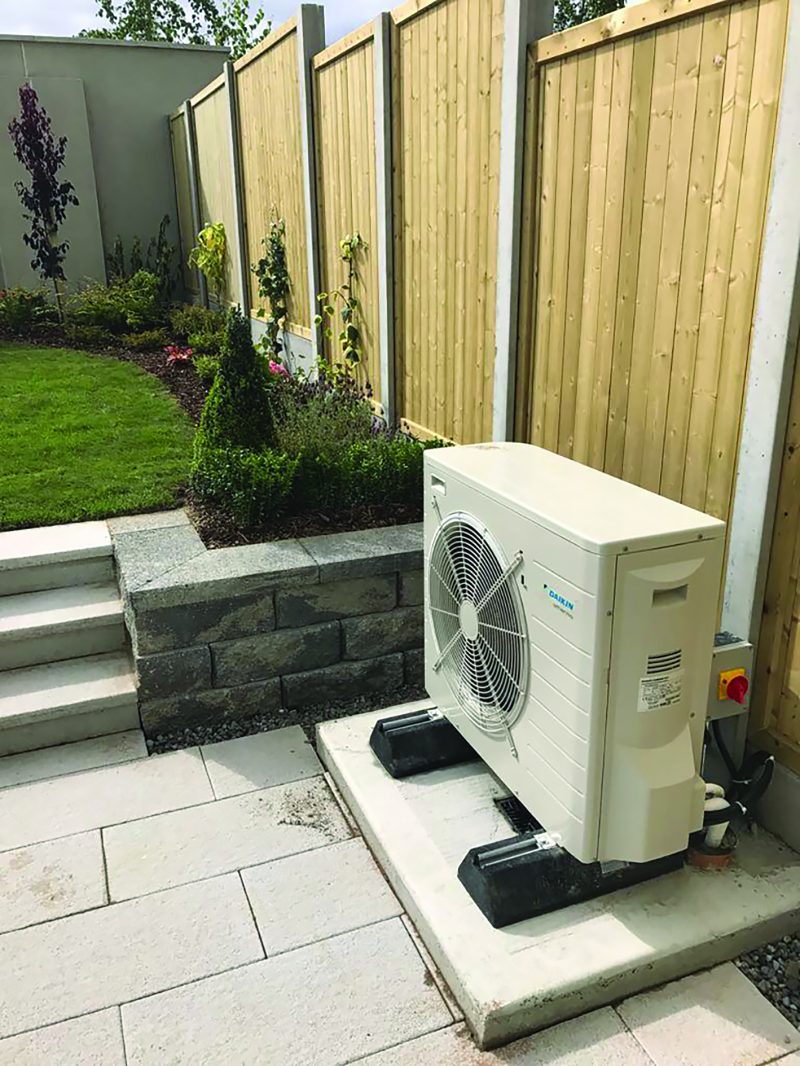 Perhaps the best-selling point for the ground source heat pump is its aesthetic appeal: they are often the first choice for larger properties where the sight and to a lesser extent, sound, of large outdoor units would be deemed unacceptable.

All ground source / geothermal heat pumps are connected to the ground via
a heat exchanger, usually in the form of a plastic pipe collector array.

When collecting heat from a horizontal field array of pipes, the area selected will need to be approximately two and a half to three times the floor area of the building being heated. The pipes are normally placed 1m below the lawn and at least 1m to 1.5m spacing. As a rule of thumb for a 250sqm you will need two sets of 300m long rolls to yield 12kW.

‘Heat pumps are fined tuned, with weather compensation controls, to work at the lowest temperature possible on a continuous basis.’

In Ireland the soil 1m below the surface is about 10degC or even warmer all year round; the incoming collector fluid will usually not fall below 5degC inbound in winter. A correctly functioning heat pump should have a temperature difference of 3degC to 5degC.

Placing the collector field deeper than around one metre in Ireland does not give any advantage, in fact the soil will take longer to recover heat that would trickle inwards from sun and rain.

If there is not enough room for a horizontal array, then a borehole or energy-well should be chosen instead. In this case a 150m deep energy well will yield 10kW for heating, which would be enough for a 200sqm house.

How far down you go will normally be specified by the heat pump supplier or services engineer’s calculations, and for bigger properties, multiple holes may be required. There needs to be a minimum distance of 12m to 15m between the energy wells so they don’t rob heat from one another.

Where available it can be convenient to use a lake, river or even the sea as
the source of heat for a geothermal heat pump. This simply saves the cost of earthworks or drilling.

In terms of installation costs, the heat pump components are roughly the same price for ground source as for air source; the additional costs come from getting the digger on site and the collectors (pipework/ borehole, antifreeze).

Whats the best value for money when it comes to roof coverings?

A fridge running in reverse is the essence of a heat pump. In the case of a fridge the heat that’s inside it is extracted, thereby providing cooling and expelling waste heat. A heat pump similarly extracts energy from the
ground, air or water. To make this kind of heat transfer happen you need
a carrier that makes up the temperature difference, and that is the refrigerant.

A benefit is that this mechanism results in maintenance that is much
lower than for combustion based (oil or gas) systems as the care requirements of flue gas content and internal burners is removed. The need for checking the water and antifreeze mix being the only element for consideration.

The pump that circulates the water around the pipe network is usually a sealed unit and does not require regular maintenance. The internal circulation pump for the heating system would require checking for each
heating season.

However refrigerants by their nature aren’t that eco-friendly; to reduce ozone depletion and global warming potential (GWP) a less harmful refrigerant now on the market is R32, fast replacing R410A as the standard. R32 is a diflouromethane molecule that has zero ozone depletion effect and a GWP potential of 675 which is just 17 per cent of R404A and 32 per cent of R410A.

R32 systems use up to 20 per cent less refrigerant than the previous R410A systems making them more efficient and therefore reducing carbon emissions and energy costs. R32 is a single component refrigerant which
means it is cheaper to produce and also easier for recycling and re-use.

Although it is considered slightly flammable with a level of A2L on the ASHRAE scale, which in the UK has led to further training for installers, it has excellent heat transfer and pressure drop in condensation and vaporisation.

The race to find a better refrigerant is on, with leading manufacturers already working on replacements for R32. Watch this space

Combined heat and power (CHP) is the simultaneous production of space heating, hot water and electricity.

Around 15 years ago microCHP, a term which describes the application of CHP on a domestic scale, began to come into the frame and a number
of manufacturers entered the market.

Most of these systems were powered by natural gas and provided space heating and hot water plus about 1kW to 3kW of electrical output, depending on the exact type and size.

At the lower end this would have covered continuous loads such as fridges, alarm systems, etc, while at the higher end a significant proportion of a dwelling’s total electricity requirement could be met.

The viability of the systems proved not to be as favorable as expected because of the relatively low price of electricity as compared to fuel costs (gas), and relatively high capital cost.

The latest development in this arena is the fuel cell micro-CHP which uses a lot less gas because it converts it to hydrogen; the hydrogen is then put through the fuel cell to generate electricity and heat. A key difference between fuel cell CHP and conventional CHP is that, in the fuel cell, the fuel is not combusted.

The cost of a system today depends on installation details but a ballpark figure is around £20,000 / €27,000.
Patrick Waterfield

It is often advantageous in new builds to place the collector field underneath a percolation area dug for the wastewater discharge to save space and excavation time/costs. If you can save on this, then a geothermal system as compared to an air source system will be in the order of €2,000
or about £1,800 more expensive than an air source heat pump.

A borehole system will add an additional €3,000 to €4,000 or about £3,500 for drilling each well. A ground source heat pump can reasonably be expected to last 20 years at which point the units in the home may need to be replaced; the collectors should last for the lifetime of the property (underground pipes can be considered good for 70 years or more).

Ground source heat pumps combined with underfloor heating offer a unique selling point, which is that they can provide passive or ‘free’ cooling. On very hot days, water is circulated at a regulated temperature
usually no lower than 18degC in the floors – now we have a climate system, not just a heating system.

This function is however only available with a borehole: unwanted heat is stored in the rock to be extracted later for water or space heating. This passive cooling function requires very little energy to circulate the anti-freeze circuit, which is why it’s referred to as passive cooling, but it can only be done with an underfloor heating system (not radiators).

This is especially useful in larger homes that tend to overheat in summer because of a large amount of south facing glazing. Active cooling which requires a larger energy input (to run the compressor), similar to that required for heating, can be supplied by any type of heat pump that’s
designed to do so.

Passive or active cooling functions will add to the capital cost of the heat pump installation.